International Red Panda Day 2020: Interesting Facts About the Endangered Animal That Live on the Trees! 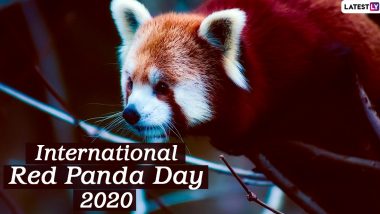 International Red Panda Day is observed on the third Saturday of September to create awareness on protection of red panda and safeguarding the habitat. International Red Panda Day 2020 falls on September 19. They are also called as bear-cat, firefox, and Himalayan raccoon. The red panda is a species native to the eastern Himalayas and southwestern China. It is listed as Endangered on the IUCN Red List and in the wild, it is estimated at fewer than 10,000 mature individuals. Their population is on the decline due to habitat loss and fragmentation, poaching, and inbreeding depression. As we observe International Red Panda 2020, we bring to you some interesting facts about the red panda. Rare Red Panda Born in Berlin Zoo From Indian Parents As Part of Global Breeding Program, Watch Video.

You can create awareness on the observance by sharing pictures of red pandas using the hashtags #InternationalRedPandaDay. In China, the Chengdu Research Base of Giant Panda Breeding visits schools in rural areas where red pandas live. In Nepal, communities celebrate with speech competitions and film viewings. Many other organizations host activities that educate the public on the importance of red panda conservation.

(The above story first appeared on LatestLY on Sep 19, 2020 07:30 AM IST. For more news and updates on politics, world, sports, entertainment and lifestyle, log on to our website latestly.com).