Jeffree Star Floods Twitter with Funny Kanye West Memes After Clarifying He Wasn't the Reason for Kanye's Breakup with Kim Kardashian After All!

Jeffree Star recently clarified that he and Kanye West do not have a relationship and that Kim Kardashian is not divorcing Kanye because the makeup guru is "sleeping with" her husband. 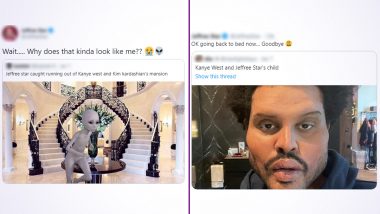 Jeffree Star recently clarified that he and Kanye West do not have a relationship and that Kim Kardashian is not divorcing Kanye because the makeup guru is "sleeping with" her husband. However, he couldn't help but notice some of the funniest memes and jokes that took over social media because of these rumours and managed to flood his page with his favourite ones. We cannot stop laughing at the hilarious posts.

Rumours had it that Kanye cheated on Kim Kardashian West with Jeffree Star and this unbelievably bizarre piece of information took over Twitter and TikTok in the US about a few days ago. It said how Kanye West cheated on his wife, Kim with beauty guru Jeffree Star. However, there is no evidence to support the theory that Kanye even met Jeffree Star, let alone dating him. Here’s Looking At Kim Kardashian And Kanye West’s Lovely Moments Together Amid Divorce Rumours (View Pics)

It was, in fact, a TikTok video from a troll who stated Jeffree Star is dating Kanye West and it is not true, as per the Insider.

Nevertheless, here are some of the best memes you can look at:

I just opened my eyes and it’s too early for this shit 😂😂 https://t.co/iRDZosfhdc

The 35-year-old beauty guru shared a YouTube video titled "Addressing The Kanye Situation" and cleared the air. "I’m single ... I’m not sleeping with anyone. This is so weird … this is so stupid. Let me just say this one time … I like very tall men. Me and Kanye have never hung out, and this whole thing is really funny. I get why people are really laughing about this. In an old song of mine from 2009 called B**** Please, I say a line about Kanye. The makeup artist captioned the clip,

Kim Kardashian and Kanye West are said to be ending their six-year-old marriage as he was so engrossed in his schedule of creating music that he had no time for her or their children and they faced other relationship issues too. According to E! News. Kardashian and West who are still looking forward to saving their six-year marriage, have been taking therapy for their relationship to work. "She and Kanye have been in counselling and trying to work through things, but she doesn't have much hope. She has been in contact with her lawyers again to work out a settlement," admitted the close source.

(The above story first appeared on LatestLY on Jan 09, 2021 09:28 AM IST. For more news and updates on politics, world, sports, entertainment and lifestyle, log on to our website latestly.com).