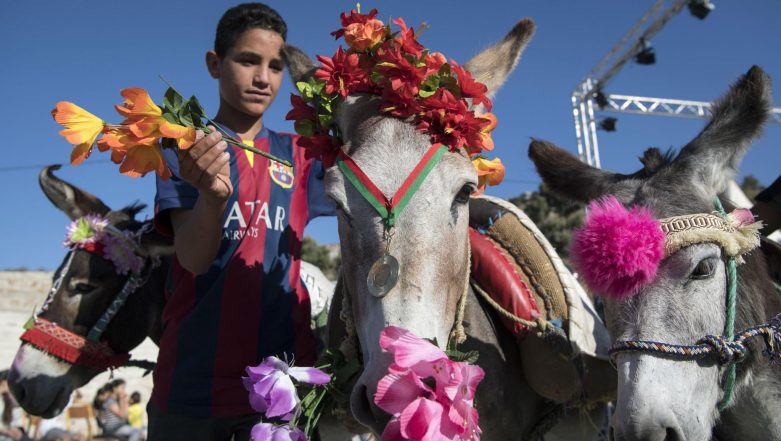 Beni Ammar, August 1: Wearing a crown of flowers, "Cleopatra" the donkey delighted villagers in central Morocco by bucking the trend to clinch top prize in a beauty pageant. Named after the ancient Egyptian queen, she triumphed at the Festibaz event -- becoming the first female donkey ever to win the contest, held in the village of Beni Ammar.

"It's a devoted and tireless animal, but it must be looked after," said Abdeljalil, the winner's 26-year-old owner. A farmer, he took home a prize of 2,500 dirhams ($260, 235 euros) and a sack of barley, as the pageant returned in late July after a five-year break caused by funding difficulties. As well as a flower crown, Cleopatra wore glamorous sunglasses and was dolled up to the end of her hooves for the nine judges.

The panel included a vet and a philosophy professor, who closely examined the donkeys' appearance, health and bond with their owners. The twelfth edition of the festival in Beni Ammar, some 120 kilometres (75 miles) west of the capital Rabat, was intended as a celebration. The donkey "plays an essential role in the life of village residents", said Mohamed Belmou, who works in Rabat but is originally from the village.

Donkeys are a key mode of transport and pull heavily-laden carts in rural areas, but the animals have a bad reputation in popular culture and their name can be used as an insult. "We want to rehabilitate the image of man's old companion, victim of abuse and bad-mouthing," added Belmou. One competitor saw the contest as a way to promote donkey's milk. 18 Panda Cubs Ring in First Birthday Together With Cake And Songs at China Conservation Centre (Watch Adorable Video).

"It seems that this milk sells at a high price for its cosmetic properties -- I'm hoping to create a cooperative to be able to export it," said Mohamed, a 47-year-old farmer. The annual contest also entertains villagers, whose youth gathered to watch around 20 donkeys take part in a one-kilometre race ahead of the pageant.

In less than five minutes, "Rambo" passed the line ahead of competitors including "Fire" and "Bluetooth" -- supposedly named for his speed.