Orchid Mantis Photos & Videos Go Viral: Walking Flower Mantis is A Beautiful Bug, Here’s What You Should Know About the Insect That Resembles Orchid Flower! 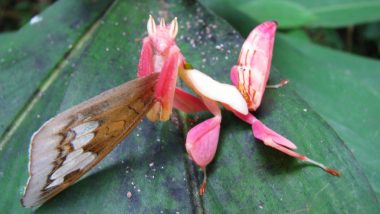 Walking orchids, famously known as the orchid mantis, also known as Hymenopus coronatus, is one of the several species known as flower mantises from their resemblance and behaviour. As beautiful their appearance is, the mantis is one biggest trickster of the animal kingdom. An Indian Forest Officer, Susanta Nanda recently shared a video on Twitter. It shows the orchid mantis, strolling on a great leave, showing off its beautiful features, mimicking the orchid flower. Its resemblance to the flower will stun you, but the bug is quite smart to hunt its prey. Because of its likeness, the insect deceives pollinating bugs into stopping by for a visit. Instead of collecting pollen and nectar, they become a meal for the walking orchids. In this article, we bring you everything you should know about the insect, including some beautiful videos that might stun you. Rosy Maple Moth Pays Surprise Visit to This Twitter User! Viral Thread Captures the Beautiful Pink and Yellow-Hued Candy Floss Bug Resting at the Deck.

Orchid mantises are dazzlingly beautiful. Its pinkish legs appear to form a delicate flower blossom. They are significantly found in the tropical forests of Southeast Asia. In India, the insects are spotted in the Western Ghats. This species is characterised by brilliant colouring and a structure finely adapted for camouflage, mimicking parts of the orchid flower. Its toothed front pair is used for grasping prey. Video of Mysterious Looking Insect Goes Viral, Twitterati Marvels at Nature's Creation of 'Lichen Katydid'.

These are insects known as Orchid Mantis. Seen in western ghats of India. Incredible Nature.. pic.twitter.com/CgYeGRHv97

From white to yellow to pink and purple, the orchid mantis comes in various colour, and they use its resemblance to attract prey. They are so confident in their ability to mimic flowers that they just hang out on leafy greens and let the prey come to them. Video of Colourful Leaf Insects Go Viral! 6 Quick Facts to Know About Phylliidae or Walking Leaves.

Unsuspecting insects mistake the mantis for a flower, allowing the pretty predator to snatch them up for a quick meal. Flying insects like the butterflies and moth are the mantis main source of food. The orchid mantis can also fly.

(The above story first appeared on LatestLY on Jul 13, 2020 04:54 PM IST. For more news and updates on politics, world, sports, entertainment and lifestyle, log on to our website latestly.com).