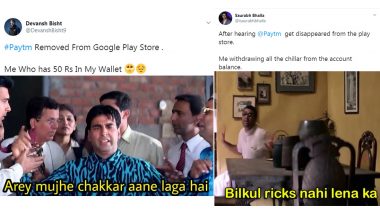 Digital payment application Paytm no more finds a place on the Google Play Store. Google has taken down the application for repeatedly 'violating its gambling policies'. The Indian startup app which boasts of more than 50 million monthly active users is no more available on the Play Store for further downloads. Paytm First Games has also been pulled down. Now users who have been using the app are wondering how to get their money withdrawn from the wallet. Meanwhile, others have resorted to giving the best meme reactions. Using the set of meme templates, #Paytm has began trending along with #GooglePlayStore on Twitter with funny memes and jokes.

A statement from Vice President of Product, Android Security and Privacy says Google "does not allow online casinos or support any unregulated gambling apps that facilitate sports betting." It mentions these policies protect a user from harm. Although Paytm has been removed other apps from the company like Paytm for business, Paytm money, Paytm Mall, and others are still on the Play Store. Meanwhile, people online are known to react with memes and jokes every time something major happens. So just like PUBG Ban met with its share of funny memes and jokes, withdrawal of Paytm has also seen similar reactions.

Check Some Memes and Jokes on Paytm:

People With Money in Their Wallet

Me Who has 50 Rs In My Wallet 🥺😔#Google #PlayStore pic.twitter.com/CoB2AvlEnJ

After hearing @Paytm taken down from Google Play Store

Google is in touch with the Paytm developers regarding the digital wallet app and its gambling policies. There has not been any statement from the app yet. Meanwhile, you can just enjoy the meme-fest that's begun online.

(The above story first appeared on LatestLY on Sep 18, 2020 03:02 PM IST. For more news and updates on politics, world, sports, entertainment and lifestyle, log on to our website latestly.com).