Telangana Formation Day 2020: Interesting Facts About Telangana, India’s Youngest State That You Must Know About 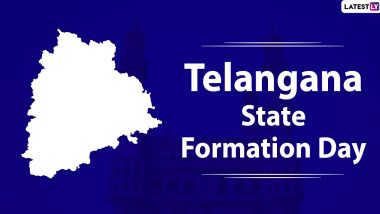 Telangana carved out of the erstwhile Andhra Pradesh is India’s youngest state having been formed on 2nd June 2014 after a long political struggle. Despite its fairly young existence, the state is ahead on the economic and human development index parameters of many of its peers. Historically, the area of Telangana was ruled by the Nizams and is known for its Ganga-Jamuni tehzeeb that promotes brotherhood between communities. It is home to several important Indian defence and administrative missions and is a leading IT hub of the country. The capital of Tamil Nadu – Hyderabad is one of India’s most important metros. Telangana Formation Day Images & HD Wallpapers For Free Download Online: Celebrate State Formation Day on June 2 With WhatsApp Messages, SMS, Quotes and Greetings.

On the Telangana formation day, we take a look at some interesting facts about the state.

Since Hyderabad was the capital of the Nizam empire, the state has plenty of palace and forst like the Chowmahalla Palace.

Telangana is one an accelerated path of progress with plenty of industries and a strong agricultural base. In the coming years, it is going to be a huge contributor to India’s GDP.

(The above story first appeared on LatestLY on Jun 02, 2020 08:29 AM IST. For more news and updates on politics, world, sports, entertainment and lifestyle, log on to our website latestly.com).