What K-Pop Stans Means And How BTS Army is Helping in Trending their #BlackLivesMatter Campaign Using Memes and Tweets! 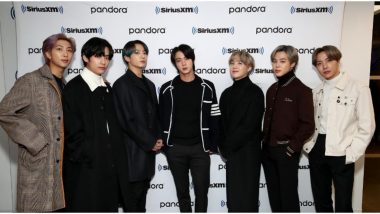 Korean pop band BTS recently reacted to the killing of an African-American, George Floyd in the US. The video of the victim saying 'I can't breathe' while a police officer was kneeling on his neck went viral on social media and it probably enlightened us with what a society we're still living in. Modern-day America is no different and there's a long way to go before equality becomes the new norm. While celebs all over the world have condemned the horrific incident, BTS took extended their support and K-Pop Stans have been busy hailing them since then. Black Lives Matter: BTS Joins the Fight Against Racism After the Horrendous Killing of George Floyd (Read Tweet).

What is the meaning of K-Pop stans you ask? Well, in simpler words they are the hardcore fans of the Korean pop bands. While fans are everywhere, 'stans' is used to describe people who go above and beyond the average loyalty of most fans. In fact, their loyalty is like a shield that no one can break. They can't take criticism or hear anything remotely negative about the said artist. When it comes to BTS, they are also called as BTS Army. Ever since the pop band tweeted in support of #BlackLivesMatter movement, their army is busy making it a viral trend and their craze on Twitter is simply too much. Check out some of their reactions. BTS'Jungkook Tests Negative After Visiting COVID-19 Hotspot In Itaewon, South Korea; Agency Issues Apology.

We stand against racial discrimination.

You, I and we all have the right to be respected. We will stand together.#BlackLivesMatter

A Simple Thank You Does the Trick

Yes, It Does Matter

It Means a Lot

Thank you for using your platform to speak on this

Reading this while hearing namjoon's voice, followed by the rest of the boys afterwards. I'm crying.

Fans Do Take Everything Personally

They donated sir, there is no need to make a fuss everywhere that they did. Now its your time to open your purse pic.twitter.com/f2ftZjrflm

They are Also Inspiring Others

as such huge inspirations to me im glad you guys spoke up about this, i really appreciate it thank you 💜

BTS Army is Crazy for Them

He Is Called The Bestest Leader For Us😭😭💜💜..... No Matter What💜💜 pic.twitter.com/a4j7wsRZot

While some of their admirers are also insisting that they should empty their 'purses' and donate for the same initiative, a report suggests that they have already done the needful. The pop band has apparently donated a significant amount but they'd like to keep it private. Well,

(The above story first appeared on LatestLY on Jun 05, 2020 11:33 PM IST. For more news and updates on politics, world, sports, entertainment and lifestyle, log on to our website latestly.com).