August 11, a Day of Champions: From Shane Warne’s Historic Wicket to Chris Gayle Making Record ODI Appearance; Take a Look at Records Made on This Day 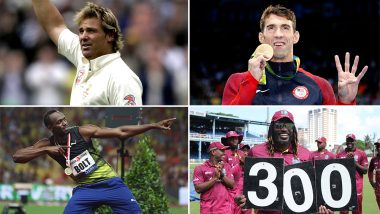 August 11 is a day of champions. A day when legends scripted history and smashed records. Be it cricket greats Shane Warne and Chris Gayle or Swimming legend Michael Phelps or one of the greatest athletes of all-time in Usain Bolt, all these heroes of the game have been greatly associated with August 11. But while the other three athletes completed their milestones in the past, Chris Gayle is set to become the first West Indies cricketer to appear in 300 ODIs for the Caribbean nation. Gayle will overtake another West Indian legend Brian Lara, who appeared in 299 ODI games. Chris Gayle Becomes 1st West Indies Player to Feature in 300 ODIs During IND vs WI 2nd Match at Trinidad; Check 'Universe Boss' Record in 50 Overs Cricket.

It was on this day that Shane Warne completed 600 Test wickets in 2005 when he dismissed England opening batsman Marcus Trescothick in the opening Ashes Test to reach the landmark. Three years later it was this very day that Michael Phelps and his relay team smashed the swimming world record at the 2008 Beijing Olympics. Phelps smashed the all-time record of gold medals won at a single Olympic game. The American legend won a total of 14 gold medals at Beijing that year, 8 of which were in single events. Virat Kohli Breaks Javed Miandad’s 26-Year-Old Record of Most ODI Runs Scored against West Indies during IND vs WI 2nd ODI Match.

🔸 2008: Michael Phelps and his relay team smash the world record at the Olympics

A day of champions 🙌 pic.twitter.com/cIBAuOCySA

Five years after 2008 it was also on this day that sprint legend Usain Bolt won the 100m final at the 2013 Athletics World Championships in Moscow. A year before that Bolt was disqualified from the final after breaking seconds earlier and his compatriot Justin Gatlin won the Championship. But back for the Athletics World Championship in Moscow, Bolt regained his status as the world’s fastest man by winning the 100m in record time. Bolt finished in 9.77 seconds beating Galitan by eighth hundreds of a second.

(The above story first appeared on LatestLY on Aug 11, 2019 10:14 PM IST. For more news and updates on politics, world, sports, entertainment and lifestyle, log on to our website latestly.com).