Ahead of ICC Cricket World Cup 2019, Here’s a Look Back at How Pakistan Fared at the Last Edition of the CWC 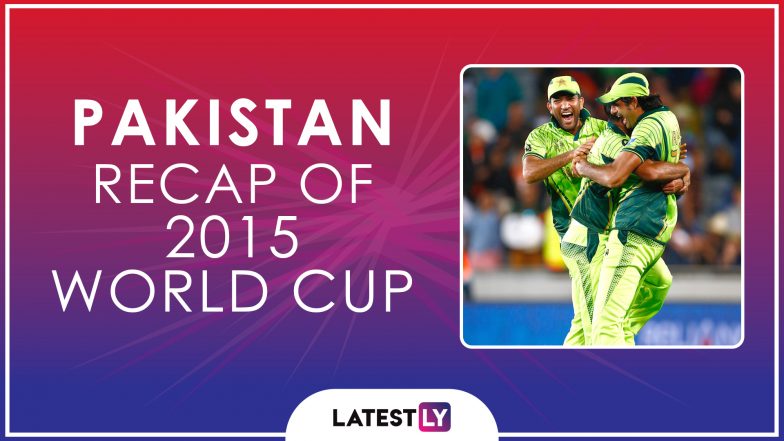 The Pakistan cricket team is known to be an unpredictable side when it comes to ICC tournaments and it showed it to the world with when it lifted the 2017 ICC Champions Trophy. But two years prior to this triumph, the 2015 World Cup was a big disappointment as they got knocked out in the quarter-final stage. The men in green did try and repeat the triumph of 1992 down under but things did not click for them under the guidance of Misbah Ul Haq. Throughout their campaign, their pace attack did ruffle a few feathers, but batting did not quite hit the peak. Ahead of ICC Cricket World Cup 2019, Here’s a Look Back at How India Fared at the Last Edition of the CWC.

Group Stage: Pakistan were placed in Pool B along with India, South Africa, West Indies, Ireland, Zimbabwe and the United Arab Emirates. Their first game against arch-rivals India is one of the most viewed games in the history of the tournament which ended in a loss. A defeat to West Indies was followed by four straight victories including one against the mighty Proteas. They ended the group stage in third place with 8 points.

Quarter-Finals: Their quarter-final clash with Australians is known for the spell of Wahab Riaz where he had the Oz on the backfoot. Chasing a meagre total of 214 for a win, the Pakistan pace attack dominated the opening spell with some classic swing bowling. Shane Watson, in particular, had a really tough time but fielding let Pakistan down. The Australian batsmen after surviving the scare started to play their shots eventually registering a six-wicket win.

Most Runs for Pakistan: Pakistan skipper Misbah Ul Haq scored 350 runs in seven innings at an average of 50 to lead their batting charts. Unfortunately for Misbah, he had little support from the rest of the batsmen in the campaign.

Most Wickets for Pakistan: Wahab Riaz was the most successful bowler for Pakistan side. He bagged 16 wickets in seven matches with the best bowling figure of 4/45 coming against Zimbabwe.

Chris Gayle, Shoaib Malik And Others Who May Retire from ODIs Post CWC19

Pakistan enjoys playing in English condition as they showed in the 2017 Champions Trophy with their pace attack performing well. But question marks remain on their batting and fielding which could prevent them from lifting the World Cup.