Bhuvneshwar Kumar burst onto the scenes in Indian Premier League (IPL) 2011 where he bowled some spectacular spells for the now-defunct Pune Warriors India. A year later, he was drafted into the national team, and he didn’t take long in making a mark at the highest level. 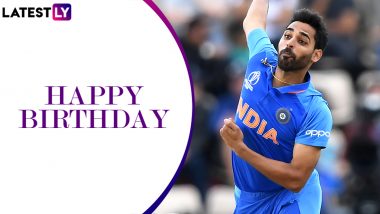 Veteran Indian fast bowler Bhuvneshwar Kumar turns 31 on Friday (February 5) and birthday wishes are pouring in for him from all over the world. Born in 1990, the right-arm pacer is a brilliant exponent of swing bowling, and the bucket of variations in his armoury makes him even more lethal. Be it taking wickets with the new ball or restricting the run flow in the final overs, Kumar rose to every challenge which came his way. Not for forget, the Uttar Pradesh cricketer is a handy batsman lower down the order who has played many significant knocks for Team India. Bhuvneshwar Kumar Aware Comeback In Indian Test Team Not Easy.

Kumar burst onto the scenes in Indian Premier League (IPL) 2011 where he bowled some spectacular spells for the now-defunct Pune Warriors India. A year later, he was drafted into the national team, and he didn’t take long in making a mark at the highest level. Despite not having express pace, Kumar regularly troubled batsmen and proved his mettle in all formats of the game. So far, the right-arm pacer has scalped 63, 132 and 41 wickets in 21 Tests, 114 ODIs and 43 T20Is respectively. With Kumar being 31, a lot of cricket is still left in him, and the record will eventually enhance even further. Meanwhile, let’s look at some quick facts about the swing master. Bhuvneshwar Kumar Urges ICC to Come Up With Artificial Way to Shine Balls.

# Bhuvneshwar Kumar was born on February 5, 1990, in Bulandshahar in Uttar Pradesh.

# He made his first-class debut at the age of 17 against Bengal in the Ranji Trophy.

# In 2009, Bhuvneshwar became the first player to dismiss Sachin Tendulkar for a duck in Ranji Trophy.

# Kumar made international debut against Pakistan in a T20I match in December 2012.

# The pacer dismissed Mohammed Hafeez in the very first ball of his ODI career.

# He has a unique distinction of getting his first wicket in all the three formats of the game as bowled.

# During India’s 2014 Tour of England, Kumar became the first Indian number 9 player to score three fifties in a Test series.

# Kumar is the only bowler in IPL history to win consecutive Purple caps. Representing Sunrisers Hyderabad (SRH), He was the highest wicket-taker in 2016 and 2017 season.

# He is also the first Indian bowler to take five-wicket hauls in all three formats.

Kumar has been out of radar since a while due to injuries. While he played his last international match in December 2019, the pacer featured in just four games in IPL 2020. However, he looked in decent touch in the recently-concluded Syed Mushtaq Ali Trophy, representing Uttar Pradesh. Hence, he could come back in the national team during the three-match ODI and T20I series against England.

(The above story first appeared on LatestLY on Feb 05, 2021 08:26 AM IST. For more news and updates on politics, world, sports, entertainment and lifestyle, log on to our website latestly.com).