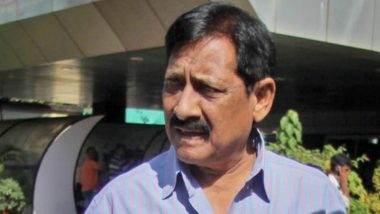 Former Indian cricketer and politician Chetan Chauhan suffered a Kidney failure and has been put into ventilator at the Medanta hospital in Gurugram. In July, the 73-year-old was also tested positive for COVID-19 and was admitted to the Sanjay Gandhi PGI hospital in Lucknow. He was yet to recover from the rapidly-spreading disease when he suffered kidney failure and blood pressure problems on Friday. Owing to his medical conditions, doctors decided to put Chauhan on life support. The former batsman is among the few members of the Indian cricket fraternity who have been contracted with the coronavirus disease. Chetan Chauhan Test Positive for Coronavirus in Lucknow.

When Chauhan was tested positive for Coronavirus in July, his family was put into home quarantine. The veteran was the sports minister of Uttar Pradesh till last year. He also holds the Sainik Welfare, Home Guards, PRD and Civil Security ministry in the UP cabinet. Chetan Chauhan Lauds MS Dhoni's Patriotism.

During his career as a cricketer, Chauhan played several sensational knocks and guided India to many memorable victories. He formed a formidable pair with Sunil Gavaskar at the top of the order and the duo smashed many potent bowling line-ups. Making his international debut in 1969, the gritty cricketer was known to face the Caribbean and Australian pacers without any fear.

Speaking on his numbers, Chauhan played 40 Tests between 1969 and 1978 and scored 2084 runs at an average of 31.57 with 97 being his highest score. With Sunil Gavaskar, Chauhan added more than 3000 Test runs including 10-century opening partnerships. He also played seven ODIs in which he accumulated 153 runs. For his contribution towards Indian sports, he received the honorable Arjuna Award in 1981.

(The above story first appeared on LatestLY on Aug 15, 2020 05:17 PM IST. For more news and updates on politics, world, sports, entertainment and lifestyle, log on to our website latestly.com).