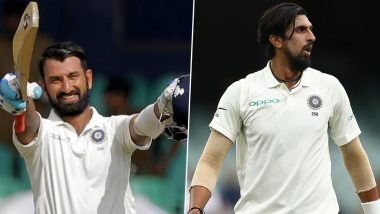 The next assignment of the Indian cricket team might be uncertain amid the COVID-19 crisis. However, many players have resumed individual training outdoors following the easement in lockdown restrictions. Cheteshwar Pujara and Ishant Sharma are also among those Indian cricket stars who have taken bat and ball in hand after a long time. The two veteran cricketers took to their respective social media accounts and expressed their delight of getting onto the field after a long break. Pujara shared a couple of photos in which he can be seen posing with his kit while Sharma shared videos in which he can be seen running. IPL 2020 Update: BCCI's Decision Regarding Indian Premier League 13 Will be in Interest of Country, Cricket; Says Rajeev Shukla.

“Back at it...felt like a long time away but just as I took the stance felt as if it was yesterday,” wrote Pujara while sharing the snaps on the picture-sharing website. The Saurashtra-born batsman was last seen during the India vs New Zealand Test series where he wasn’t able to leave a great impact. However, he will tour Australia for his next international assignment and he’ll aim to replicate his last time heroics.

Back at it...felt like a long time away but just as i took the stance felt as if it was yesterday

Talking about Ishant Sharma, while sharing the photos and videos on Instagram, he wrote: “Engaging myself with positivity and practising while maintaining social distancing.” Just like Pujara, the pacer next fixture with the Indian team will get underway in Australia. However, he is also a key part of Delhi Capitals in the Indian Premier League (IPL). So, if, as per plan, BCCI manages to conduct the T20 extravaganza in October, the lanky pacer can be seen piling his trade over there.

Sharma and Pujara might have started training outdoors. However, the likes of Indian skipper Virat Kohli and his deputies Rohit Sharma and Ajinkya Rahane are forced to remain inside their residence as their city comes under the most affected region in India.

(The above story first appeared on LatestLY on Jun 24, 2020 01:16 PM IST. For more news and updates on politics, world, sports, entertainment and lifestyle, log on to our website latestly.com).