Chennai Super Kings head coach Stephen Fleming has predicted a bright future for young Sri Lankan pace bowler Matheesha Pathirana for the franchise in the coming years, after the 19-year-old grabbed two wickets in a losing cause for the four-time champions against Gujarat Titans at the Wankhede Stadium on Sunday. 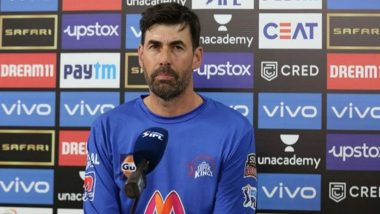 Mumbai, May 16: Chennai Super Kings head coach Stephen Fleming has predicted a bright future for young Sri Lankan pace bowler Matheesha Pathirana for the franchise in the coming years, after the 19-year-old grabbed two wickets in a losing cause for the four-time champions against Gujarat Titans at the Wankhede Stadium on Sunday. Pathirana bowled an economical spell while also taking the wickets of GT opener Shubman Gill and skipper Hardik Pandya to rattle them in the chase in his debut match for CSK. However, Wriddhiman Saha's unbeaten half-century helped the IPL newcomers to a seven-wicket victory with five balls to spre. Chennai Super Kings vs Gujarat Titans IPL 2022: 3 Reasons Why CSK Lost.

"Yeah, great. We were really looking forward to him playing and he has had success straightaway. He is very young, we know who the similarities he has with which are big shoes to fill. He had a great debut, and we are really pleased for him. It is a unique skill, and learning to coach how to use that is one of the challenges. It was great for him to get a game with us," Fleming said. The head coach also added that the Super Kings know where they want to improve going into next year, and they will leave "no stone unturned" for IPL 2023.

"We have got some jigsaw puzzles and we are just trying to fit them all together. It is not just about how a player will perform one day, it is the role that he does. We have got a view to where we want to get to, and where we need to improve for next year. We went through this two years ago, and we got it right. So, we are really working hard on trying to get the jigsaw pieces together. "There are some places that we probably need to fill as a lot of teams that don't qualify have that same challenge. What we try and do is see what we have got right now and make sure that we have no stone unturned when we plan for next year," said Fleming. ‘Baby Malinga’ Matheesha Pathirana Gets a Wicket off His First Ball on IPL Debut During CSK vs GT Clash (Watch Video).

Fleming added that the expansion of the IPL had provided more opportunities to youngsters to showcase their talent. "It has been good. The two new teams have allowed more youngsters to get more prominent roles, which I think is another great opportunity for Indian cricket to develop more talent. We have got a few, we have seen a few on show and we have introduced a few today. Our preference has been for more experience, but by no means do we not look for young players and young talent. "And, we are very happy with the guys that have played today and certainly happy with the guys we have in our squad. "The start of the three-year cycle is the time that you bring the young players in and then you make something out of them during those three years," added Fleming.

(The above story first appeared on LatestLY on May 16, 2022 01:19 PM IST. For more news and updates on politics, world, sports, entertainment and lifestyle, log on to our website latestly.com).