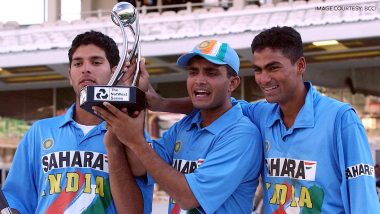 The 2002 Natwest Series Final between India and England is still one of the most thrilling encounters to have taken place at Lord’s. Chasing 326, the Men in Blue were reduced to 146/5 and their defeat looked inevitable. However, the youngsters defied all the odds and guided India to a famous two-wicket triumph. Recently, Mohammad Kaif, who scored 87 off 75 deliveries in that game, recalled the epic encounter and revealed skipper Sourav Ganguly’s advice ahead of the chase. This Day That Year: India Beat England to Clinch 2002 NatWest Trophy.

The former right-handed batsman revealed that the atmosphere in the dressing room was quite tense ahead of the encounter and the mood was also quite low. t hadn’t started so well. I remember the scene in the dressing room just before we went out to chase. We were struggling to figure out how to chase big totals those days and there was a feeling of ‘here we go again’,” Kaif wrote in his column for The Indian Express. Sachin Tendulkar Recalls Hilarious Incident of Why Mohammad Kaif Was Nicknamed ‘Bhai Sahab.’

However, Kaif added that Sourav Ganguly calmed the nerves of the team in the team meeting. “The mood was low. John Wright, our coach, stood at one end and it was more a players’ meeting. We stood around as Sourav Ganguly spoke: “Don’t panic. We will just start well, try not to lose any wicket and take it on later,” he added.

Chasing a mammoth total, openers Sourav Ganguly and Virender Sehwag got India off to a sensational start. The duo went after the England bowlers from the outset and rained fours and sixes all over the park.

“And he (Ganguly) did what he said. He hit a six over covers, as he and Virender Sehwag gave us momentum. But then wickets fell and I was in the middle. I had never batted in such an atmosphere, in at no. 7, Sachin was out and still some 180-odd runs needed in 24 overs,” Kaif recalled.

After a 106 opening stand, however, the likes of Rahul Dravid and Sachin Tendulkar fell for low scores as India were tottering. Nevertheless, Yuvraj Singh (69) and Mohammad Kaif came to their side’s rescue and aggregated 121 runs for the sixth wicket. The former was dismissed. However, Kaif didn’t put a foot wrong as India crossed the line. Ganguly was ecstatic and that was evident from his shirt-waving celebration.

(The above story first appeared on LatestLY on Jul 16, 2020 08:30 PM IST. For more news and updates on politics, world, sports, entertainment and lifestyle, log on to our website latestly.com).