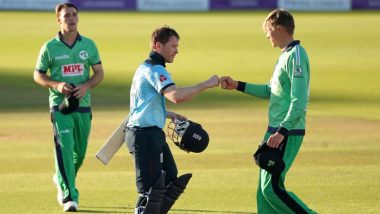 England began their journey for the 2023 Men’s Cricket World Cup qualification with a commanding six-wicket win over Ireland. The two teams faced each other in the first game of a three-match ODI series which was also the inaugural game of the newly introduced Super League format – a set-up for WC qualification. This was the first One-Day international played since the coronavirus enforced suspension. ENG vs IRE, 1st ODI 2020 Match Result: David Willey, Sam Billings Star as England Beat Ireland by 6 Wickets.

England are the defending world champions and started off their qualification campaign in style post lockdown. Though ODI cricket has resumed after a long break, it was far from what people have been used to over the years. No fans were allowed inside the stadium, players were kept in a bio-secure bubble and the post-game handshakes have been replaced by fist-bumps. England vs Ireland 1st ODI 2020 Highlights.

Speaking of the match, after being asked to bat first, riding on debutant Curtis Campher’s half-century, Ireland managed to put on a score of 172 runs on the board. In reply, the hosts struggled as after being 59/3 at one stage, Sam Billings’ knock of 67 not out got them over the line. David Willey was adjudged as Man of the Match for his personal figures of 5/30.

The second game of the series will be played on August 1, 2020 (Saturday) at the Rose Bowl Cricket Stadium in Southampton. Ireland will be hoping to make a comeback while England will look to secure the series and also give a chance to some fringe players in the process.

(The above story first appeared on LatestLY on Jul 31, 2020 11:16 AM IST. For more news and updates on politics, world, sports, entertainment and lifestyle, log on to our website latestly.com).