England Have Bowling Experience but We Have the Skills, Says Pakistan Test Captain Azhar Ali 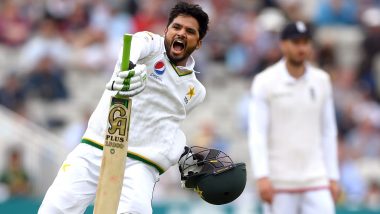 Karachi, June 28: Pakistan Test captain Azhar Ali backed his young pace attack to trouble the England batsmen when they lock horns in a gruelling series later this year. The two teams will play three Tests and as many T20Is after the completion of England's three-match Test series against West Indies which starts July 8. Pakistan's pace battery comprises of Shaheen Afridi and Naseem Shah, both whom have never played Test cricket in England.

"In terms of number of games, of course England have tons of experience in their bowling," Azhar was quoted as saying by ESPNCricinfo. "But we have the skills: they (our bowlers) are young and have a lot to offer. "They can give trouble to any team in the world. In a very short time, they have achieved a lot and that is a good sign. Azhar Ali Aims to Guide Pakistan to Number One Spot in ICC Test Rankings, Says, ‘We Need to Produce Extraordinary Results in Away Series’.

"You can't buy experience immediately, and for that you obviously have to play more, but then we have a very experienced coaching staff with Waqar Younis and Mushtaq Ahmed. "Their expertise and knowledge can be utilised and they will be helping them. So I believe, when this combo of experience and skill is brought together, that we can produce a great result. I am confident about this," he added.

Azhar also feels that they can target England top-order which, according to him, remains fragile since the retirement of Alastair Cook in 2018. England have failed to tie down a settled opening combination and Azhar feels Pakistan bowlers can exploit that in the series.

"Looking at their batting, their top order has been fragile for some time since Alastair Cook retired," he said. "They have tried a lot of combinations lately and might be looking a bit more settled, but they haven't been really confident with it. So there is something for us in it to look at."

(The above story first appeared on LatestLY on Jun 28, 2020 09:23 PM IST. For more news and updates on politics, world, sports, entertainment and lifestyle, log on to our website latestly.com).