Happy Birthday Sourav Ganguly: Here Are His Five Important Captaincy Decisions That Turned Out To Be Master Strokes

Ganguly has been one of Indian cricket's finest captains and ambassadors. After a stellar career, he has now donned the hat of the Board of Control for Cricket In India president and on his 49th birthday, let us take a look at five of his moves as captain which made history. 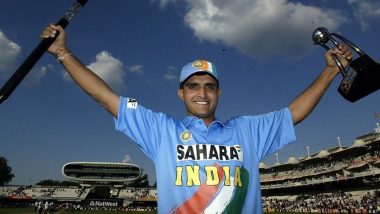 Sourav Ganguly has been one of the finest cricketers that India has ever produced. Not just for his exquisite field-piercing cover-drives or his audacious strikes over mid-wicket, but also for his captaincy and self-belief that he instilled within the team he led to greater heights in world cricket. One might highlight his failure to win the World Cup in 2003 but there's no denying the fact that the seeds of success India attained in 2011 under Mahendra Singh Dhoni, were actually sowed by none other than Ganguly. Sourav Ganguly Turns 49: Kolkata Knight Riders, Virender Sehwag And Other Cricketers Wish Former Indian Captain On His Birthday (See Tweets)

As a matter of fact, under his captaincy, India learnt to be a competitive force while playing away from home. They could defeat the mighty Australian team under Steve Waugh in 2001, the highlights of the series being the iconic Rahul Dravid and VV Laxman partnership and Harbhajan Singh's match-winning spell. And yes, also the famous NatWest trophy win in England. On his 49th birthday today, let us look at five important decisions made by him which changed the course of Indian cricket forever.

1) Promoting Virender Sehwag up the order: We all know how destructive a batsman like Sehwag was at the top of the order. But interestingly, the aggressive right-handed batsman didn't begin as an opener. Instead, he started out at number 6, and had scored a hundred against South Africa on Test debut. A move to the top of the order worked wonders for Sehwag, whom we know today as one of India's most destructive and best openers who led the country to innumerable wins and scripted many records. Two triple hundreds with a strike-rate of 82.23 is something we know about Sehwag, the opener, courtesy Sourav Ganguly.

2) Instilling self-belief to win overseas: One of India's areas of struggle was to win in overseas conditions. But under Ganguly, that narrative was completely changed. As a leader, he made his team believe that they could win in overseas conditions. He led India'a fearless approach of playing cricket in difficult conditions and the numbers tell the rest of this story. Ganguly captained India to 11 Test wins in 28 overseas matches--a record only bettered by current Indian captain Virat Kohli. Not just wins but the belief that he sowed in the team has definitely taken Indian cricket to newer heights and made them the dominant force they are, today.

3) Giving Rahul Dravid the wicket-keeper's gloves: One of the highlights of Ganguly's captaincy was Rahul Dravid featuring behind the stumps in ODIs. Dravid wasn't a natural keeper and he even didn't prefer doing that work. But Ganguly had the bigger picture in mind and wanted to maintain a balance within the team. Dravid playing as keeper would allow the side to have one extra batsman. Ganguly himself dropped down the order so that the team benefited from a balanced batting line-up.

4) Supporting Kumble: Apart from building a team, Ganguly also supported and backed his players to come good for the country. So much so, that he'd risk his career for them. An exact similar situation happened with Anil Kumble, who was all set to be dropped from the Indian squad for the tour of Australia in 2003-04. The selectors wanted to pick a left-arm spinner to exploit the Aussie batsmen but Ganguly refused to sign the team sheet if Kumble wasn't picked. He stated that if the Karnataka spinner wasn't picked, he might never play for India again. Willing to take the blame in case this selection backfired, he was successful in including the leg-spinner in the Indian squad. The rest is history. He went on to have a brilliant series in Australia and ended up taking 80 wickets that year--most by a spinner in a calendar year in Test cricket! Kumble till date, is India's best spinner with 619 Test scalps.

5) Building a strong team: You must have heard of the term 'Fab Five' in Indian cricket. Comprising of Sachin Tendulkar, VVS Laxman, Sehwag, Dravid and Ganguly himself- this batting line-up would easily go down as one of the world's best. Ganguly put together the experience of these five stars and the youth and energy of players like Harbhajan Singh, Yuvraj Singh, Zaheer Khan and even MS Dhoni. He built a team that comprised of the very best in Indian cricket back then and gave this team a morale boost, especially after the match-fixing scandal in 2000. As a matter of fact, it was a team that he made that won the coveted World Cup trophy in 2011 after a 28-year wait. So, even if he might have failed to lift a World Cup himself, taking nothing away from Dhoni, we know who formed the foundation of that win.

After hanging up his boots, Ganguly's dream of taking Indian cricket to greater heights hasn't died out yet. He is now heading affairs behind the scenes and there's no doubt he would excel in that role as well.

(The above story first appeared on LatestLY on Jul 08, 2021 07:27 PM IST. For more news and updates on politics, world, sports, entertainment and lifestyle, log on to our website latestly.com).