India Will Qualify for Final If Reserve Day of IND vs NZ CWC 2019 Semi-Final is Washed Out; Manchester Weather Holds Key 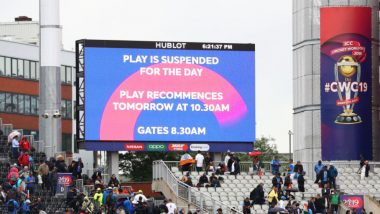 Rain has already played spoilsport in the ICC Cricket World Cup 2019 (CWC 2019). Four round-robin matches have been already washed out and there is a danger of another game being called off to due to the rains. While the first round matches of CWC19 had no reserve days, thankfully semi-finals and final of the tournament have such luxury. The India vs New Zealand semi-final 1 of CWC 2019 was suspended after rain stopped play. The match now goes into the reserve day, July 10.  India vs New Zealand CWC 2019 Semi-Final Match Suspended Due to Rain: Play to Resume With NZ Innings on Reserve Day.

The play was stopped when New Zealand was batting. At the time heavens opened up, the Kiwis were 211 for five in 46.1 overs. With no further play possible, the match will resume from same point on the reserve day.

The weather forecast for Manchester on July 10 doesn’t look good and there is a possibility of reserve day being washed out as well. Apart from New Zealand’s 3.5 overs, we will need at least 20 overs of India’s innings to produce a result. India vs New Zealand 2019 ICC CWC Semi-Finals Play Called off for the Day Due to Rains; Fans Flood Twitter With Funny Memes and Jokes.

In case no required play is possible on the reserve day team India will go through to the finals on account of finishing at a higher spot after the round-robin stage. For the uninitiated, India finished on top of the CWC 2019 points table with 15 points while New Zealand ended with fourth spot after securing 11 points. Interestingly, the round-robin contest between India and New Zealand was washed-out without a ball being bowled. Manforce Condoms Tweets Difference Between Covers That Should Come Off And Those That Shouldn't as Rain Interrupts IND v NZ, ICC CWC 2019, Semi-Final Match.

Meanwhile, Ross Taylor and Tom Latham will be at the crease when play resumes on the reserve day. Taylor is batting on 67 off 85 balls while Latham is on three runs. For India, Jasprit Bumrah and Bhuvneshwar Kumar have two and 1.5 overs left.

(The above story first appeared on LatestLY on Jul 10, 2019 12:04 AM IST. For more news and updates on politics, world, sports, entertainment and lifestyle, log on to our website latestly.com).