In IPL 2022, defending champions Chennai Super Kings have been a pale shadow of their usual dominating self. With just four wins out of 13 matches, Chennai are already out of reckoning for the playoffs this year. 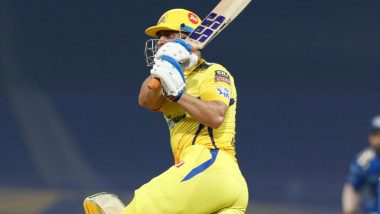 Mumbai, May 20: In IPL 2022, defending champions Chennai Super Kings have been a pale shadow of their usual dominating self. With just four wins out of 13 matches, Chennai are already out of reckoning for the playoffs this year. A surprise captaincy shuffle and then back to MS Dhoni, injuries to players including Ravindra Jadeja, Ambati Rayudu taking back his IPL retirement tweet, it has been a disappointing roller-coaster of a campaign for the men in yellow. IPL 2022: Tilak Varma Is Probably the Standout Young Player for Mumbai, Says Mahela Jayawardene.

Now with Chennai all set to play their final league match against Rajasthan Royals at the Brabourne Stadium on Friday, the burning question on everyone's minds has been: will this be the last time Dhoni will be turning out for his beloved franchise? Former Indian captain and legendary batter Sunil Gavaskar hopes for Dhoni to don the yellow jersey in the 2023 season.

"Look at the way he's played this season. He's still keen and enthusiastic about the game. When you are not sure about your future you tend to lose your intensity on the pitch. But we've seen him running between the overs from one end to the other keenly, he's still fit and taking those quick singles and doubles while batting. All this only hints that 'Definitely Not'," said Gavaskar with a laugh on Cricket Live show on Star Sports.  Aamir Khan Flaunts His Excellent Footwork in New Video, Reminds Ravi Shastri To Revisit His Film Lagaan – WATCH.

With speculations rife on Dhoni's IPL future after Chennai's campaign in IPL 2022 ends, Gavaskar further claimed that if at all Friday turns out to be the wicketkeeper-batter's last game in the extravagant T20 league, then he should bat higher in the order and draw curtains to an illustrious career on a terrific note. "He said that he'll be seen in the CSK yellow next year, whether as a player or as support staff we don't know yet. But if it is the last time (we are going to see him play for the franchise), I hope he bats up in the order to give us something to remember, just like that six (he hit) on April 2 2011."

(The above story first appeared on LatestLY on May 20, 2022 06:25 PM IST. For more news and updates on politics, world, sports, entertainment and lifestyle, log on to our website latestly.com).