The ongoing IPL 2022 has seen one theme emerge as the standout: The rise of young, uncapped Indian pacers, who have left fans as well as experts enthralled with their pace, variations and wicket-taking abilities. 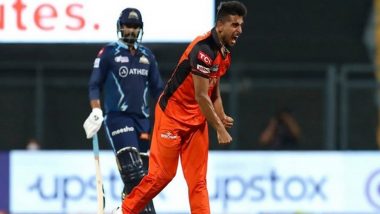 Mumbai, May 21 : The ongoing IPL 2022 has seen one theme emerge as the standout: The rise of young, uncapped Indian pacers, who have left fans as well as experts enthralled with their pace, variations and wicket-taking abilities. With India set to play South Africa in five T20Is from June 9-19 as the road to the T20 World Cup in Australia begins, Brian Lara, Sunil Gavaskar, Harbhajan Singh and Ravi Shastri have called for inclusions of tearaway right-arm pacer Umran Malik and left-arm fast bowler Arshdeep Singh to be in the squad. Lara, working as batting coach of Hyderabad and having seen Malik from close quarters, claims that the pacer reminded him of Fidel Edwards, the fiery ex-West Indies pacer. "Umran Malik reminds me a lot about Fidel Edwards when he first started, a lot of pace and I hope that he understands it as he goes into international cricket, which I think he'll eventually play," said the West Indies batting legend on Cricket Live show on Star Sports. MI vs DC, IPL 2022 Live Cricket Streaming: Watch Free Telecast of Mumbai Indians vs Delhi Capitals on Star Sports and Disney+ Hotstar Online.

Gavaskar, the Indian batting legend, couldn't stop gushing about Umran Malik's pace and accuracy throughout the tournament and wishes to see the Jammu pacer in the Indian squad against South Africa as well as for the tour of England. "Umran Malik has been very-very impressive with his speed but more than his speed, it's his accuracy that's impressed me the most. A lot of guys who bowl at that speed tend to spray the ball around but Umran bowls very few wide deliveries. "If he can control the wides down the leg side, he will be a tremendous bowler because that will mean he'll be attacking the stumps all the time, and with his pace, it's not easy to hit straight. If he bowls wicket-to-wicket, he will be pretty much an unplayable bowler. He's going to play for India. He should be in that Indian squad for the one-off Test and the ODI series against England."

Though Arshdeep (10 wickets) has been behind Malik (21 wickets) in the wicket-taking list, the left-arm pacer has been phenomenal in the death overs with an economy rate of 7.31, the best among all bowlers in the tournament. Arshdeep's accuracy to bowl the ball of his choice has left Harbhajan impressed apart from the youngster's fearless attitude. "The best thing about Arshdeep Singh is that he's a fearless bowler. He's got a lion's heart. While many players get bogged down during pressure situations but he flourishes more often than not during tense moments. There is so much confidence in this bowler and the belief that he can do well during tense moments. Sunil Gavaskar Criticised for his Comment on Shimron Hetmyer’s Wife During CSK vs RR IPL 2022 Match.

"The other day we saw him giving suggestions to a world-class bowler like Kagiso Rabada on which line to bowl to. This shows how involved he is in the game and doesn't shy away from sharing his thoughts with the senior players. He bowls yorkers at will in the death overs. I believe a left-arm pacer of this calibre should get a chance to play for India sooner rather than later." Arshdeep's possible inclusion into the Indian team also got a strong word of support from Shastri, the former India head coach. "For someone so young and to deliver time and time again when the chips are down and the pressure is on him (it's brilliant to see). Arshdeep is holding on to his nerves brilliantly, he's doing well in death overs. This shows he's moving up the ranks very quickly and he could soon be walking into the Indian team."

(The above story first appeared on LatestLY on May 21, 2022 03:52 PM IST. For more news and updates on politics, world, sports, entertainment and lifestyle, log on to our website latestly.com).