Punjab Kings fans should chin up as KL Rahul successfully underwent surgery for appendicitis on Monday. The PBKS captain flew to Mumbai via a charter plane, where he underwent laparoscopic appendectomy, a minimally invasive surgery. 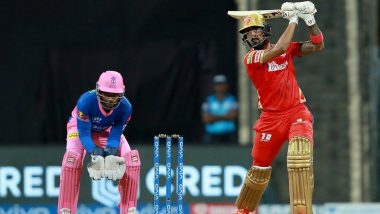 Punjab Kings fans should chin up as KL Rahul successfully underwent surgery for appendicitis on Monday. The PBKS captain flew to Mumbai via a charter plane, where he underwent laparoscopic appendectomy, a minimally invasive surgery. While any official statement on Rahul’s health is yet to come, ESPNcricinfo reported that the 29-year-old has been asked to take a week’s rest before restarting his training. Hence, the Mohali-based franchise will now consult with Indian Premier League (IPL) officials to determine Rahul's quarantine period and other protocols needed for him to re-enter PBKS’ bio-secure bubble. IPL 2021 Points Table Updated.

For the unversed, PBKS, in a statement, revealed that Rahul was suffering from ‘acute appendicitis’ and was subsequently taken to hospital. Due to this, the dashing opener missed Punjab’s recent game against Delhi Capitals and Mayank Agarwal took over the leadership role. Although Agarwal did well the bat and scored 99 in the clash, Delhi Capitals eventually walked away with a comfortable seven-wicket win.

This was Punjab’s fifth loss in eight games, due to which they are sixth in the team standings. With the first half of IPL 2021 done and dusted, PBKS need to buckle up to seal a playoff berth. However, Rahul is set to miss some more games, and Mayank has a job in hand. Fortunately for Punjab, Rahul’s surgery was successful, and he’s likely to join the team after serving the required quarantine period.

Meanwhile, PBKS will next meet Virat Kohli’s Royal Challengers Bangalore at the Narendra Modi Stadium in Ahmedabad on Thursday (May 6). Although Punjab had defeated RCB by 34 runs in their reverse fixture this season, Rahul will not feature in this game and replicating the history won’t be easy for Mayank Agarwal’s troop.

(The above story first appeared on LatestLY on May 03, 2021 08:15 PM IST. For more news and updates on politics, world, sports, entertainment and lifestyle, log on to our website latestly.com).