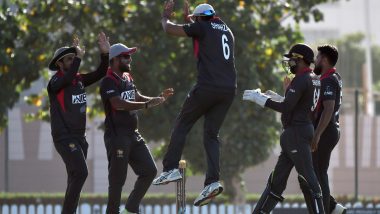 UAE were shocked by Oman in their opening game of the 2019 T20 World Cup Qualifiers. The victory, added to another convincing win over Hong Kong, took Oman to top of Group B. United Arab Emirates are placed fourth with two points from the same number of games. They failed to pile up the runs against Oman in their first game and were beaten by seven wickets but UAE bounced back with a vital win against heavyweights Ireland to keep themselves in the race for progressing to the group stages of 2020 T20 World Cup in Australia.

Hong Kong, on the other, have lost both of their matches so far in 2019 ICC T20 World Cup Qualifiers. They are placed second last in Group B after defeats to Ireland and Oman. They batted first against Ireland and put up 153 in 20 overs with Kinchit Shah scoring a quick half-century but Hong Kong failed to defend it. In the next match against Oman, they bundled for just 102 runs and Oman chased it down with 16 balls and seven wickets to spare.

United Arab Emirates vs Hong Kong match in Group B of ICC T20 World Cup will be played on October 21, 2019 (Monday). The UAE vs HK game will be played at the Sheikh Zayed Stadium in Abu Dhabi, UAE. It is scheduled to start at 03:40 pm IST (Indian Standard Time) and 02:10 pm local time.

The game will be live telecast on Star Sports, DD Sports and DD National in India, while in UAE fans can catch the live action on OSN Sports Cricket HD channel.

Unfortunately, UAE vs HK game will not be live-streamed online. But fans can follow the official website of International Cricket Council (ICC), which will be providing the live updates of the game. Viewers can also follow LatestLY for the live score updates and ball-by-ball commentary details of the United Arab Emirates vs Hong Kong match.

Oman currently lead Group B with four points from two matches. Canada are second with two points from the same number of matches. Jersey, UAE and Ireland all have two points each from two games respectively but are behind on run-rate.

(The above story first appeared on LatestLY on Oct 21, 2019 02:45 PM IST. For more news and updates on politics, world, sports, entertainment and lifestyle, log on to our website latestly.com).