Siraj lost his father on November 20 due to a lung-ailment just a week after arriving in Australia. But the 26-year-old pacer decided against leaving the team and chose to stay back in Australia and fulfil his late father’s dream. He eventually made his debut in the second Test at Melbourne. Siraj’s best moment came in the final Test. 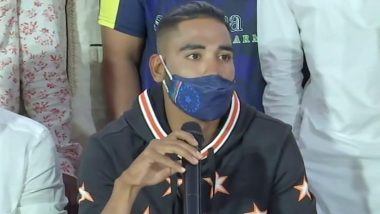 Mohammed Siraj had gone through a lot since arriving in Australia but did not break down. He had an emotional moment when the national anthem played at the start of the IND vs AUS Sydney Test but overcame emotions to lead the attack for India in the very next Test. At Sydney, though Siraj would experience the unexpected – racial abuse. The young Indian players were told before the start of the series to expect sledging and abuse from the Australian crowd. But for a boy grieving his father’s death and in his first overseas tour, it would have been a lot to cope with. But Siraj did not break down. Mohammed Siraj Drives Straight to Father’s Grave From Hyderabad Airport After Returning From Australia, Pays Tribute.

“It made me mentally strong,” he told reporters after landing in India with the Border-Gavaskar trophy having just seized Australia’s unbeaten streak at The Gabba. Siraj and Jasprit Bumrah were subject to racial abuse on day 3 and 4 at Sydney during the India vs Australia third Test. The pair, accompanied by captain Ajinkya Rahane, took the matter to the on-field umpires who informed that the players could leave the field. Virender Sehwag on Mohammed Siraj After Picking Maiden 5-Wicket Haul in Test Cricket Says 'The Boy Has Become a Man on This Tour'.

“My job was to inform that I was being abused, I told the entire matter to captain Rahane. Umpires told us that you can walk off the field and leave the game but Ajju bhai told the umpire that we won't leave, we respect the game," Siraj quoted as saying by news agency ANI.

Australian crowd started abusing me, it made me mentally strong, not letting it hamper my performance was my prime concern. My job was to inform my captain that I was being abused & I did: Cricketer Mohammed Siraj on racial slurs hurled at Indian cricketers in Sydney, Australia pic.twitter.com/yME7Ckpp9s

Play had to be halted for almost 10 minutes on day four of the Sydney Test after Siraj and the senior Indian players informed the umpires once again of being racially abused by a section of the crowd at the SCG. Six spectators were then evicted out of the stadium before play could resume. While such incidents would easily affect the mental aspect of any young debutant, Siraj was unperturbed. "Australian crowd started abusing me, it made me mentally strong. Not letting it hamper my performance was my prime concern,” he said.

Siraj lost his father on November 20 due to a lung-ailment just a week after arriving in Australia. But the 26-year-old pacer decided against leaving the team and chose to stay back in Australia and fulfil his late father’s dream. He eventually made his debut in the second Test at Melbourne. Siraj’s best moment in the Test series, however, came in the final Test at The Gabba where he claimed his maiden five-wicket haul and became the first Indian bowler in 17 years to a five-for in Test matches in Brisbane.

"It was a difficult phase for me, I lost my father and it was a bit taxing on me mentally. I spoke to my family, they told me to fulfil the dream of my father, my fiancee also backed me and the entire Indian cricket team was behind me. It was an emotional moment for me today, I went to the graveyard. I entered my home, my mother started crying as soon as she saw me. I ate home-cooked food after a long time and it was really good to be back home," said Siraj.

"I dedicated my every wicket to my dad, I celebrated with Mayank Agarwal after taking wickets in the second innings of the Gabba Test, I dedicated my every wicket to dad. Before the series started, I never thought I would take five wickets. Because of the injuries, we had to up our game. Everyone trusted me, they backed me, they told me that I am the leading bowler, I had pressure on me, but I enjoy challenges and I was just looking to hit the right areas on the Gabba wicket," he added.

(The above story first appeared on LatestLY on Jan 21, 2021 06:37 PM IST. For more news and updates on politics, world, sports, entertainment and lifestyle, log on to our website latestly.com).