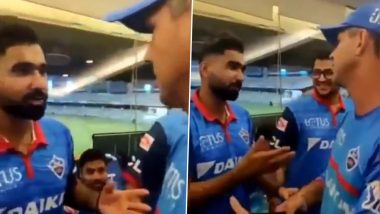 Post an emphatic 37-run win over Mumbai Indians in the opening clash of IPL 2020, Delhi Capitals head coach Ricky Ponting praised multiple players like Rishabh Pant, Shikhar Dhawan and Kagiso Rabada in the dressing room. While he was walking off after giving the speech, Tewatia stopped the former Australian captain and said something. The conversation wasn’t audible, but soon after their chat ended, Ponting turned around and said– “Boys, Tewatia took four catches, and wants a pat on the back.” Rahul Tewatia Hailed As Hero After his Match-Turning Knock.

All the players burst into laughter, and it was evident that Tewatia asked Ponting to highlight his performance. Soon, fellow spinner Axar Patel walked to Tewatia and mocked him by saying, “Who asks for praises, brother?” However, a confident Tewatia responded with– “you have to fight for your right.”

Fans were heart whelmed after coming across the video as they heaped praises on Tewatia’s hard work and dedication. Well, these are still early days in IPL 2020, and the all-rounder will want to put up many more match-winning performances.

(The above story first appeared on LatestLY on Sep 28, 2020 03:56 PM IST. For more news and updates on politics, world, sports, entertainment and lifestyle, log on to our website latestly.com).