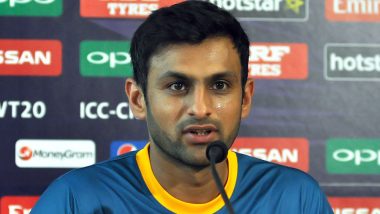 Lahore, June 21: Veteran Pakistan batsman Shoaib Malik feels that the team stands a very good chance of winning the 2020 T20 World Cup, if it goes ahead as per plans. The fate of the showpiece event, which is scheduled to be played in Australia later this year, hangs in balance due to implications put forward by the coronavirus pandemic.

Shoaib, who won the trophy once in 2009, stated Pakistan have a very good bowling attack and that is why they will be one of the top contenders at the tournament.

"I believe our chances are very good," Shoaib told PakPassion. "In order to win these kinds of events, you have to have a very strong bowling attack and I think we have that box ticked. In addition, we also have a good batting line-up to complement that strong bowling attack." Pakistan Squad to Leave for England Tour on June 28, Shoaib Malik to Join on July 24.

"Not only that, but our fielding has also developed and improved over the years, which is important on big grounds.

"Our fitness is much improved and better than it was in previous years, so overall, I think we will be right up there as a team that stands a very good chance of winning this tournament if it goes ahead," he added.

Shoaib, in July, will join the 29-man Pakistan squad that leaves for England on June 28. The tour is set to consist of three Tests and as many T20Is and will all be played in empty stadiums due to the coronavirus pandemic.

"Of course, we all like to see packed stadiums and matches that have a buzz from the crowd, which all adds to the spectacle. But right now, the situation around the world is very concerning and we must do what is right for everyone's health and safety," he said.

"Hopefully one day and not too far into the future crowds will be back. But for now, cricket needs to be played and if this is what needs to be done to get cricket back on then we must support it and accept it."

(The above story first appeared on LatestLY on Jun 21, 2020 06:57 PM IST. For more news and updates on politics, world, sports, entertainment and lifestyle, log on to our website latestly.com).