The Koninklijke Nederlandse Cricket Bond (KNCB) on Saturday announced that Ryan Cook has been appointed as the interim head coach of the men's national team in place of Ryan Campbell. 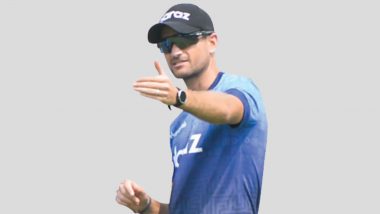 Amsterdam, May 14: The Koninklijke Nederlandse Cricket Bond (KNCB) on Saturday announced that Ryan Cook has been appointed as the interim head coach of the men's national team in place of Ryan Campbell. "I am honoured to be joining the team and look forward to working with the players and coaches for the next few months. There is an exciting schedule ahead and I aim to help the team from strength to strength," said Cook in a statement. Brendon McCullum Will Bring a Sense of Security, Identity to England, Says Abhishek Nayar.

Cook had recently served as the fielding coach of the Bangladesh men's team and had worked as fielding-cum-assistant coach for South Africa 'A' and U19 teams apart from being assistant coach for Hobart Hurricanes at the Big Bash League (BBL) in 2018. He is also working as the Head coach at the Gary Kirsten Cricket Academy in Cape Town. The statement said Cook will work closely together with James Hilditch, Peter Borren and Netherlands captain Pieter Seelaar.

Campbell, who represented Australia in two T20Is and three ODIs apart from turning out for Hong Kong, had suffered a cardiac arrest while on a family holiday in England last month. He then spent seven days in induced coma at NHS Royal Stoke University Hospital in Stoke-on-Trent before being discharged. The KNCB said that Campbell, appointed as Netherlands head coach in 2017, is expected to make a full recovery and hope to welcome him back into the side later in the cricketing summer. Chennai Super Kings Gujarat Titans Betting Odds: Free Bet Odds, Predictions and Favourites in CSK vs GT IPL 2022 Match 62.

Netherlands are scheduled to play three ODIs against the West Indies from May 31 to June 4, followed by facing ODI World Cup Champions England for another three-match ODI series from June 17 to 22. In August, they will host New Zealand for two T20Is before playing three ODIs against Pakistan from August 16 to 21. Netherlands are currently at the bottom of the ICC Men's Cricket World Cup Super League in the 13th place with two wins, coming against Ireland, in 10 matches.

(The above story first appeared on LatestLY on May 14, 2022 05:14 PM IST. For more news and updates on politics, world, sports, entertainment and lifestyle, log on to our website latestly.com).