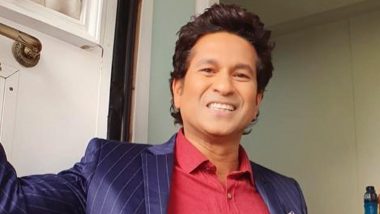 Over the last few years, many eminent personalities have come forward to speak about mental health issues. Virat Kohli, Glen Maxwell were the ones who have spoken elaborately about coping with depression and other mental health-related issues. Virat Kohli had revealed that he battled depression during India tour of England in 2004. Now, Master Blaster Sachin Tendulkar has spoken elaborately about the anxiety issues. During an interview, Master Blaster said that he had sleepless nights before the match for 10-12 years. He further explained that for him, the match had started long before the match and this led to high anxiety levels. Sachin Tendulkar Thanks Fans for Birthday Greetings, Urges Recovered COVID-19 Patients to Donate Plasma (Watch Video).

In order to maintain his calm, Tendulkar would do things like shadow batting, watching TV, playing video games, making tea, ironing clothes and the rest of the other things. He further explained that acceptability is the first step towards solving mental health-related issues. This only helps you find solutions."Acceptability is the key here. Not just for the player, for people around him also. Once you have accepted you start looking for solutions," he said during the interview.  He also said that during the ups and downs of life, you need people around you. Sachin Tendulkar even emphasised the importance of mental health in the bio-bubbles.

During the conversation, the former Indian cricketer also revealed that the person who got him dosa had actually pointed out that his elbow guard was restricting my bat swing Sachin Tendulkar retired with 34,000 runs and 100 centuries in his kitty.

(The above story first appeared on LatestLY on May 17, 2021 09:52 AM IST. For more news and updates on politics, world, sports, entertainment and lifestyle, log on to our website latestly.com).