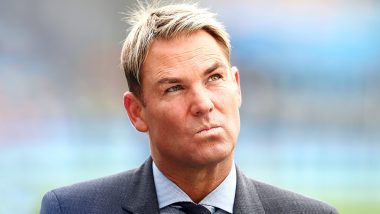 Sydney, May 27: Shane Warne cannot wait to lay his hands on the fifth season of a popular web series, the spin legend said on social media. "How good is the series -"Money Heist" !! Wish season 5 would hurry up and start already (when is it available to watch)? Who's your fav character followers?" Warne asked in a tweet from his official Twitter handle.

A Netflix original, Money Heist is a Spanish heist crime drama web series where a group of robbers try to carry out a robbery in the Royal Mint of Spain. There have been four seasons which are out with the fifth one yet to be released. Shane Warne Snubs Virat Kohli, MS Dhoni, Kuldeep Yadav from His India XI, Picks Sourav Ganguly As All-Time Best Captain.

How good is the series -“Money Heist” !! Wish season 5 would hurry up and start already (when is it available to watch) ? Who’s your fav character followers ?

Warne, regarded as one of the greatest leg-spinners to have ever played the game, recently said the art of spin bowling is sliding in his country and Cricket Australia must do something.

"Nathan Lyon is one of the best spinners in the world, and we're so lucky to have a great spinner in Lyon. If something happened to him, we've got a spinner with very little first-class experience that could be up against some of the best players in the world of spin," he was quoted as saying by The West Australian. All cricket is currently on hold due to the coronavirus pandemic which has brought the world to a standstill.

(The above story first appeared on LatestLY on May 27, 2020 09:32 PM IST. For more news and updates on politics, world, sports, entertainment and lifestyle, log on to our website latestly.com).