Shardul Thakur once again showcased his batting prowess and mustered his first half-century in List-A cricket. The right-handed batsman smashed 92 off 57 balls against Himachal Pradesh as Mumbai comfortably won the game by 200 runs. Notably, the Sawai Mansingh Stadium track in Jaipur favoured the bowlers. 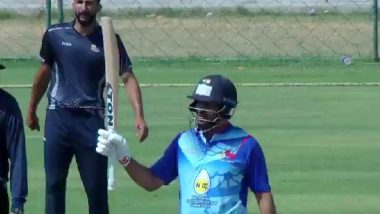 Shardul Thakur once again showcased his batting prowess and mustered his first half-century in List-A cricket. The right-handed batsman smashed 92 off 57 balls against Himachal Pradesh as Mumbai comfortably won the game by 200 runs. Notably, the Sawai Mansingh Stadium track in Jaipur favoured the bowlers as the likes of Prithvi Shaw, Yashasvi Jaiswal, and skipper Shreyas Iyer got out for single-digit scores. However, the tables were turned in the 31st over of the first innings when Thakur came onto bat with the scorecard reading 148/5. The dasher wasted no time whatsoever as the ball was flying all over the Jaipur Stadium. Devdutt Padikkal Scores Third Consecutive Century in Vijay Hazare Trophy 2021 as Karnataka Advances to Quarter-Finals.

He even looked all set to get the three-figure mark but veteran pacer Pankaj Jaiswal accounted for his wicket in the penultimate over of the innings. Shardul, who had a List-A average of 13.58 before this match, has been in handy batting form lately. Earlier this year, he made a match-winning 67 in the first innings of the fourth Test against Australia in Brisbane. While some considered that knock a mere fluke, Thakur made his bat talk once again. Chennai Super Kings, the team Shardul represents in the Indian Premier League (IPL), were delighted seeing their pacer’s blitzes as they praised him on Twitter. Many delighted netizens also lauded the 29-year-old. Abhishek Sharma Breaks Virat Kohli’s Record, Smashes Second-Fastest Century by Indian in List-A Cricket.

Well played, Shardul Thakur - 92 runs from just 57 balls including 6 fours and 6 sixes - Mumbai was 148 for 5 when Thakur came to bat and helped them to cross 300 runs - Brilliant knock from Thakur against Himachal Pradesh in Vijay Hazare Trophy. pic.twitter.com/0gEw1hmfY2

Thakur On A Roll!!

Excellent Knock From Shardul Thakur Comes To The End.

Thakur’s whirlwind knock guided Mumbai to a formidable total of 321-9 in the first innings. Chasing the target, Himachal Pradesh lost wickets at regular intervals and never really looked in the hunt. They eventually got bundled out for 121, losing the match by 200 runs. With this, Mumbai finished the league stage at the top of Group D and qualified for the quarter-finals.

(The above story first appeared on LatestLY on Mar 01, 2021 05:12 PM IST. For more news and updates on politics, world, sports, entertainment and lifestyle, log on to our website latestly.com).