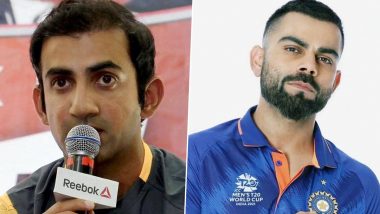 Virat Kohli might have lost ODI captaincy but that would bring out the best in him as a batsman, feels Gautam Gambhir. The BCCI on Wednesday, replaced Kohli with Rohit Sharma as the new ODI skipper of the Indian team. Thus Virat Kohli's era as captain of India's limited-overs steams came to an end. While speaking on a Star Sports show, Gambhir said, "Same as Rohit Sharma's role in red-ball cricket, it's just that captaincy is not there. It might just free Virat Kohli up much more. He might just become more dangerous in white-ball cricket with the pressure of captaincy not being there on his shoulders."  Venkatesh Iyer Pulls Off Rajnikanth Style Celebration After Scoring Hundred for Madhya Pradesh Against Chandigarh in Vijay Hazare Trophy 2021–22 (Watch Video)

Kohli has had not been in the best of forms in the past two years, his last hundred coming in 2019. Earlier in September this year, he relinquished T20I leadership citing workload management. Gambhir, who witnesses Kohli's growth as a young star to a reputed cricketer said that the right-hander would make the country proud in the future. "I am sure he is going to make India proud, he is going to keep getting runs in white-ball cricket or in red-ball cricket. At the same time, there will be two different guys probably giving their own thoughts, giving their own vision for the team," he added. Virat Kohli Posts Heartfelt Message for Wife Anushka Sharma on Their Fourth Marriage Anniversary, See Some Adorable Pictures of the Couple (Check Post)

Loss of ODI captaincy might lead to a drop in Kohli's intensity but Gambhir believes that it is something that would not change, irrespective of the fact whether the 33-year old is captain or not. "I am sure India will see the best of Virat Kohli, whether it is red-ball cricket or white-ball cricket. At the same time, the kind of passion he has shown over such a long period of time or the energy, you are going to see the same out of Virat Kohli, whether he is the captain or not."

(The above story first appeared on LatestLY on Dec 12, 2021 04:37 PM IST. For more news and updates on politics, world, sports, entertainment and lifestyle, log on to our website latestly.com).