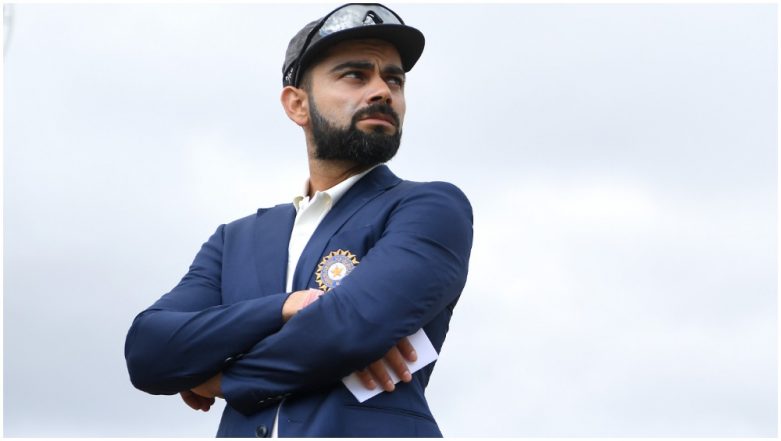 North Sound (Antigua), August 26: With the World Test Championship underway, India skipper Virat Kohli reckons managing the workload of his fast bowlers will be key for the team. After record 318-run win over West Indies in the first Test of the two-match series, Kohli spoke on the importance of his bowlers in Test matches. IND beat WI by 318 runs.

"That's probably the most important thing for us right now, managing players' workload. That's why he (Jasprit Bumrah) didn't play any white-ball cricket after the World Cup because we wanted him to be fresh for the Tests," Kohli said at the post-match presentation."He (Bumrah) is going to be a key factor for us as long as the Test championship continues. We know how good a bowler he is. And the impact he can make in a spell," he added. India vs West Indies, First Test 2019: Jasprit Bumrah, Ajinkya Rahane Star as India Decimate West Indies by 318 Runs.

Kohli also praised the other pacers in his team and said: "(Mohammed) Shami is the same (as Bumrah). "Ishant (Sharma) is a banker for years now. And he can make an impact in any spell he bowls. Those three together are bowling really well." "Umesh (Yadav) hasn't had a game, and we have Navdeep Saini, who can bowl 150 clicks, waiting in the wings. We are pretty settled as far as our bowling options are concerned. Managing workload and the number of overs we bowl is going to be a key factor for us," he expressed.

India's playing XI for the first Test drew criticism as Kohli had left experienced off-spinner Ravichandran Ashwin and Rohit Sharma. The India skipper, however, said the selections were made in the team's best interest. "There will always be opinions on a team selected. It's a responsibility that I'm fulfilling. It's a blessing that I am in a position to contribute to my team in more way than one. Nothing is possible without the team," he pointed out.

"I am taking the decisions but it is up to the individuals to do the execution. We will be put under pressure and we need to be more solid. We have enjoyed each other's success and that's been our key," Kohli added. India will now take on the hosts in the second and final Test at Sabina Park in Kingston from August 30. Former skipper Sourav Ganguly has said that Kohli needs show "consistent confidence" in his players.