Virender Sehwag, Yuvraj Singh and Others Praise Ben Stokes After Match-Winning Century in RR's 8-Wicket Win Over MI in IPL 2020

Chasing the mammoth target, Rajasthan Royals lost Robin Uthappa and Steve Smith early but that was the only success MI bowlers were to enjoy on the night. As Bern Stokes and Sanju Samson stitched up a 150-run partnership to take their team over the line with the former scoring a brilliant century. 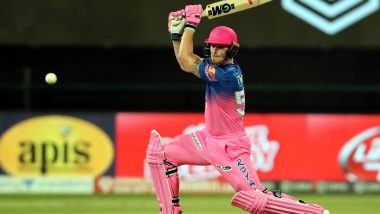 Rajasthan Royals kept their playoff qualification as they defeated table-toppers Mumbai Indians by eight wickets in match 45 of IPL 2020 at the Sheikh Zayed Cricket Stadium in Abu Dhabi on October 25, 2020 (Sunday). The game was a battle between two of the best all-rounders (Hardik Pandya vs Ben Stokes) in the world at the moment. But it was Englishman who came out on top to guide his team to a fifth win of the season. RR vs MI Highlights Dream11 IPL 2020: Ben Stokes' Staggering Century Guides Rajasthan Royals to 8-Wicket Triumph.

Mumbai Indians elected to bat first but lost Quinton de Kock for cheap. However, Ishan Kishan and Suryakumar Yadav stitched up a brilliant partnership to get the innings back on track. It was then a Hardik Pandya show in the death overs as the Indian smashed 60 runs off just 21 deliveries in an inning which included seven sixes to guide MI to a score of 195/5. Hardik Pandya Scores Joint-Fastest Half-Century for Mumbai Indians This Season During RR vs MI IPL 2020.

Chasing the mammoth target, Rajasthan Royals lost Robin Uthappa and Steve Smith early but that was the only success MI bowlers were to enjoy on the night. As Bern Stokes and Sanju Samson stitched up a 150-run partnership to take their team over the line with the former scoring a brilliant century. Fans were impressed with the Englishman’s display and praised him on social media.

Ben stokes @benstokes38 scores a quality 💯! What a timely knock when team needed it great partnership with @IamSanjuSamson another cool and composed knock ! And this #IPL2020 table is getting interesting ! Great hitting by @hardikpandya7 to set up a big total for #rr #RRvsMI

Too Much Ben Stokes

Watched Mirzapur and IPL today. Too much of Ben Stokes Master Stroke in both. #MIvsRR

One of the Best chases I have seen..#BenStokes and #SanjuSamson - 152 runs.. Unbeaten Partnership..

Great win by #RR with 8 wickets in hand and 10 balls remaining, that too against the Mighty #MI #MIvsRR #IPL2020

This win propels Rajasthan Royals to sixth in the IPL 2020 points table and keeps them in the hunt for the playoffs. However, there is still a lot to do for Steve Smith’s men if they are to make it into the final four with three games to spare. Meanwhile, Mumbai Indians failed to put some daylight between them and the other teams in the standings but still remain at the top of the table.

(The above story first appeared on LatestLY on Oct 25, 2020 11:32 PM IST. For more news and updates on politics, world, sports, entertainment and lifestyle, log on to our website latestly.com).