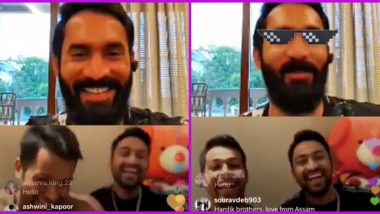 With cricket activities suspended due to the coronavirus lockdown, cricketers these days catch up with other players via video calls. Kolkata Knight Riders (KKR) captain Dinesh Karthik held an Instagram live session with Pandya brothers, Hardik and Krunal, who play for Mumbai Indians (MI). The trio talked about various things, and Knight Riders captain did not shy away from trolling the Pandya brothers. Karthik apparently enjoyed his chat with Hardik and Pandya and appeared to be in a jovial mood throughout. The video was shared by KKR on Facebook and Twitter. Dinesh Karthik Reveals How He Planned His Sensational Cameo Against Bangladesh in 2018 Nidahas Trophy Final.

During the conversation, Karthik said, “Ask decent questions, we don’t want anything controversial as it’s been a year since Hardik drank coffee,” as he made a reference to an infamous episode of Koffee With Karan featuring Hardik and KL Rahul.

“I don’t drink coffee, I drink green tea instead. I drank coffee only once and proved to be too expensive for me. I can bet that Starbucks would not have such an expensive coffee. Since then I stay away from coffee,” came Hardik’s reply. Coffee Proved Too Costly for Me, I Drink Green Tea, Says Hardik Pandya in Instagram Live Chat with Dinesh Karthik.

Karthik also joked about that Pandya family will suffer the most if Indian Premier League 2020 is cancelled. On being asked about his favourite match, Karthik teased Pandya brothers and cheekily said, “KKR vs MI in Kolkata, 2019. Scored just 230 in it.”

Karthik went on to troll Hardik who was trying some filters. “Hardik Pandya, are you a 14-year-old kid, trying filters,” Karthik joked. The KKR captain also made fun of Hardik’s English, who was reading the comments on the live feed, and said, “It is in English, so read carefully.” The wicket-keeper batsman also challenged Hardik to spell nostalgia. The all-rounder, however, floundered and the trio had a laugh about it.

(The above story first appeared on LatestLY on Apr 27, 2020 11:12 AM IST. For more news and updates on politics, world, sports, entertainment and lifestyle, log on to our website latestly.com).