Would've Killed Wasim Akram if He Had Asked Me to Do Match-Fixing, Says Shoaib Akhtar

Former Pakistan speedster Shoaib Akhtar made a stunning claim, saying he would have taken Wasim Akrams life if the latter made an approach regarding match-fixing. 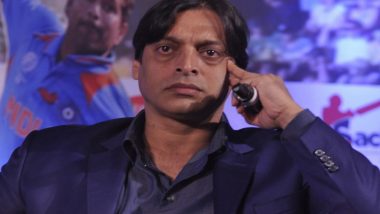 Karachi, April 21: Former Pakistan speedster Shoaib Akhtar made a stunning claim, saying he would have taken Wasim Akrams life if the latter made an approach regarding match-fixing.

"I was watching few matches of the 1990s and I was amazed to see how Wasim Akram got Pakistan through impossible situations with his brilliant bowling," Cricket Pakistan quoted Akhtar as saying during a television show.

"I will say it very clearly that if Wasim Akram had asked me to do match-fixing, I would have destroyed him or even kill him. But he never said such a thing to me," he added.

The Rawalpindi Express also thanked Akram for supporting him during the early days of his cricketing career.

"I played with him for seven to eight years and I can quote many instances where he gave me cover by taking the responsibility of picking up the top-order wickets while leaving the tail-enders for me," said the 44-year-old.

"He even let me bowl from my preferred bowling even though he had a lot more wickets that I did," he added.

(The above story first appeared on LatestLY on Apr 21, 2020 12:12 PM IST. For more news and updates on politics, world, sports, entertainment and lifestyle, log on to our website latestly.com).