The star forward did not join with the team and reportedly trained individually. Portugal have already qualified for the FIFA World Cup 2022 round of 16 after registering victories over Ghana and Uruguay respectively. 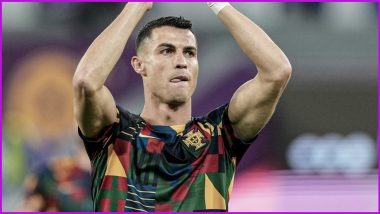 Cristiano Ronaldo reportedly missed Portugal’s training session ahead of their final Group H match against South Korea, on December 2. Portugal have already been hit by injuries, the latest one being that one of Nuno Mendes, who tearfully walked off the pitch after injuring his thigh during their match against Uruguay, which the former European champions won 2-0. Otavio and Danilo Pereira are out with injuries as well. However, in Ronaldo’s case, it is reportedly not an injury concern that saw him miss training. Cristiano Ronaldo Transfer News: Portugal Star Close to Agreeing Lucrative Deal With Saudi Arabia Club Al Nassr

According to Goal.com, Ronaldo instead trained individually ahead of the game. Other reports later claimed that he returned to training with the team. The star forward was handed a starting XI spot in both of Portugal’s matches so far and has found the net once. Ronaldo came close to scoring his second goal of the tournament when he seemed to head in a cross from Bruno Fernandes against Uruguay. But the goal was eventually awarded to his former Manchester United teammate after Adidas confirmed that the five-time Ballon d’Or winner did not make any contact with the ball. Ronaldo, with his goal against Ghana in Portugal’s campaign opener in FIFA World Cup 2022, became the first men’s player to score in five editions of the World Cup. 'Hair of God' Trends on Twitter After Cristiano Ronaldo Was Denied Goal During Portugal vs Uruguay FIFA World Cup 2022 Match

With Portugal already having qualified for the round of 16, Ronaldo had can be rested for the Portugal vs South Korea match, which would give time to the 37-year-old to recuperate ahead of the round of 16, where their opponents are yet to be decided. Ronaldo earlier, had parted ways with Manchester United following a controversial interview where he slammed the club. Reports had emerged a few days ago which claimed that he was close to agreeing on a lucrative deal with Al Nassr in Saudi Arabia.

(The above story first appeared on LatestLY on Dec 02, 2022 10:34 AM IST. For more news and updates on politics, world, sports, entertainment and lifestyle, log on to our website latestly.com).