Cristiano Ronaldo’s Armband Up For Auction in Serbia, Charity Group Collecting Money For Surgery of a Six-month-old Boy From Serbia 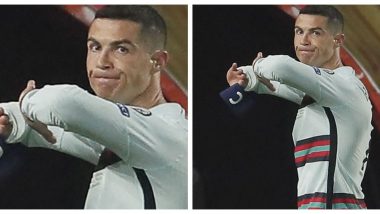 Cristiano Ronaldo's armband is up for sale! As we all know Cristiano Ronaldo had thrown away his armband while he stormed out of the stadium after his last-minute goal against Serbia was disallowed. Now, the band was picked up by one of the workers in the stadium and will be auctioned online in the next three days. The money collected from the auction will be utilised for the surgery of a six-month-old boy from Serbia with spinal muscular atrophy. Angry Cristiano Ronaldo Leaves the Field After Being Denied Winning Goal in Serbia vs Portugal Clash in 2022 FIFA World Cup Qualifiers (Watch Video).

The armband has 'C' engraved on it. The World Cup 2022 Qualifier between Portugal and Serbia ended 2-2. Cristiano Ronaldo dinked the ball over the Serbia goalkeeper and it apparently crossed the line before being cleared by an opposing defender. The referee disallowed the goal and this did not go down well with Ronaldo. The five-time Ballon d'Or award winner threw away his band near the touchline. Ronaldo was criticised heavily for his outrage and the video of the incident had also gone viral on social media.

Cristiano Ronaldo will be featuring in the playing XI for the upcoming game against Luxembourg. His team is placed on number two of the Group A points tally. The team has seven points in their kitty. Out of the two games played by Portugal, they have won one match and the other ended with a draw.

(The above story first appeared on LatestLY on Mar 30, 2021 10:03 PM IST. For more news and updates on politics, world, sports, entertainment and lifestyle, log on to our website latestly.com).