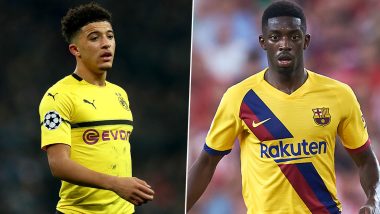 Manchester United hit a roadblock in their pursuit of Jadon Sancho when Borussia Dortmund director stated that the club will not be letting go of the English star and he will stay with them next season. But according to reports, the record English champions have already line-up Barcelona star Ousmane Dembele as an alternative if the Jadon Sancho deal does not go through. Jadon Sancho Transfer News Latest Update: Borussia Dortmund Roasts Manchester United Over Stalled Negotiations for England Star.

As per a report from ESPN, Manchester United have held talks with Barcelona forward Ousmane Dembele who still has two years left on his contract with the Catalan giants. The Frenchman hasn’t played competitive football since November 2019 due to injury and underwent surgery on his hamstring in February. Despite Jadon Sancho Transfer Bombshell, Here Is Why Manchester United Fans Shouldn’t Be Worried.

The 23-year-old winger joined Barcelona in 2017 for a record transfer fee but his three years at the Spanish side have been filled with injuries. And with Barcelona wanting to gather funds for their summer transfers, the Catalans are open to listening to offers. It is understood that initial talks of a season-long loan with an obligation to buy are being discussed but no official bid has been made as of now.

Manchester United are still hopeful of striking a deal with Borussia Dortmund for Jadon Sancho as the English transfer window is open until October 5, 2020. The German side are reluctant to lower the English forward's transfer fee than €120 million and will only sell the 20-year-old of the asking price is met.

Jadon Sancho joined Borussia Dortmund for their pre-season training camp on Monday (August 10, 2020) and though the winger is eager to join Manchester United, he hasn’t pressured the Bundesliga side for a move yet.

(The above story first appeared on LatestLY on Aug 11, 2020 08:22 PM IST. For more news and updates on politics, world, sports, entertainment and lifestyle, log on to our website latestly.com).