The competition for the top-scorer became intense as Cristiano Ronaldo on Monday bagged a brace and Ciro Immobile also managed to get on the scoresheet. The two strikers are the league's joint top-scorers with 30 goals each, reports Xinhua news agency. 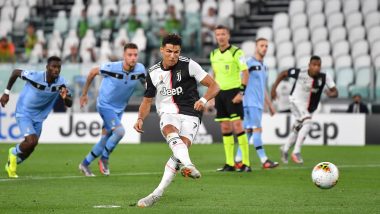 Rome, July 21: The race for the Scudetto seems a foregone conclusion as Juventus run away with the league after beating Lazio 2-1 in a highly-anticipated showdown in the ongoing Serie A competition.

The competition for the top-scorer became intense as Cristiano Ronaldo on Monday bagged a brace and Ciro Immobile also managed to get on the scoresheet. The two strikers are the league's joint top-scorers with 30 goals each, reports Xinhua news agency. Cristiano Ronaldo Breaks a Few Records With His Brace During Juventus vs Lazio, Serie A 2019-20 (Watch Video).

Lazio challenged Juventus for a long time this season, and were only point behind the Bianconeri before the suspension of Serie A. However, with a poor run after the restart, the Biancocelesti slipped to fourth place.

Both sides had an opportunity to score in the first half as Alex Sandro's header smacked the upright while Immobile's screamer also rattled the woodwork.

Juventus almost found the net straight after the break when Paulo Dybala's attempt was blocked, and Ronaldo's follow-up was cleared off the line.

The Old Lady broke the deadlock in the 51st minute when Ronaldo's strike hit Bastos' arm, the referee awarded Juventus a penalty after viewing the VAR, and Ronaldo converted it, becoming the first player to score at least 50 goals in the Premier League, LaLiga and Serie A respectively.

The home side quickly rode the momentum three minutes later when Luiz Felipe's error sparked a counter-attack, Dybala surged forward, flicking the ball to a totally unmarked Ronaldo to tap in from a close range.

The Aquile pulled one goal back through a penalty after Leonardo Bonucci brought down Immobile, and the Italian international kept his cool to convert it.

Juventus now lead the table with 80 points, eight points ahead of second-placed Inter Milan with four rounds remaining, which means the Bianconeri only need four points to capture their ninth consecutive Scudetto.

(The above story first appeared on LatestLY on Jul 21, 2020 09:15 AM IST. For more news and updates on politics, world, sports, entertainment and lifestyle, log on to our website latestly.com).