Juventus vs Inter Milan, Coppa Italia 2020-21 clash will be played at the Juventus Stadium on February 10, 2021 (Tuesday mid-night). The semi-final match of Coppa Italia is scheduled to be held at 01:15 am IST (Indian Standard Time). 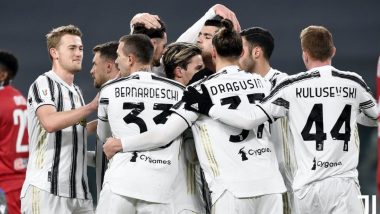 Juventus meet Inter Milan in the second leg of the Coppa Italia semi-final at the Allianz Arena, brimming with confidence with the Bianconeri enjoying a 1-2 lead in the contest. Andrea Pirlo’s side have shifted gears in the past few weeks with wins coming one after another. They still have a chance in the Serie A and cementing a place in the final of the Coppa Italia should be seen as business as usual for a team that dominates football in Italy like no one. Opponents Inter Milan have an attacking flare about their game which is much needed tonight considering they have handed a two away goal initiative. It is a test for manager Antonio Conte to strike a balance between attack and defence in the second leg as they cannot risk seeing Juventus get out of sight in the early stages itself. Lionel Messi Pips Cristiano Ronaldo, Neymar Jr to Win Best Men’s Player of the Decade Award by IFFHS.

Leonardo Bonucci will undergo a late fitness test to determine his availability for the game and should Italian international miss the tie, Matthijs de Light will be inducted into the starting eleven. Arthur has finally started to find his feet at his new club and he will line up alongside Rodrigo Bentancur in midfield. Upfront, onus will once again be on Cristiano Ronaldo to deliver the goods for the hosts.

The return of Romelu Lukaku is a massive boost for Inter Milan as the Belgian forward missed the first leg due to suspension. Alexis Sanchez and Arturo Vidal miss out due to suspension which is a big blow though. Achraf Hakimi and Ashley Young as wingbacks could trouble Juventus considering their backline does not like playing against pace.

Juventus vs Inter Milan, Coppa Italia 2020-21 clash will be played at the Juventus Stadium on February 10, 2021 (Tuesday mid-night). The semi-final match of Coppa Italia is scheduled to be held at 01:15 am IST (Indian Standard Time).

Juventus vs Inter Milan, Coppa Italia 2020-21 will not be live telecast on any television channel in India as there no broadcasters available for Coppa Italia in India. Fans can, however, follow the official social media pages of both Juventus and Inter Milan to stay updated with the encounter.

Despite there being no official broadcaster being available for the game, Juventus vs Inter Milan, Coppa Italia 2020-21 could be streamed live on online platforms. FanCode has streamed the previous games in the competition so fans catch the live action of the game on FanCode website or app and purchase the FC Match Pass to enjoy the game live. Juventus will most likely not keep a clean sheet which makes this game an open affair. A 2-2 scoreline at the end of ninety minutes looks the likely outcome.

(The above story first appeared on LatestLY on Feb 09, 2021 12:55 PM IST. For more news and updates on politics, world, sports, entertainment and lifestyle, log on to our website latestly.com).