Ivan Vukomanovic's side have a 1-0 advantage but would not be complacent of that as Jamshedpur FC are a good side with top quality attackers. Continue reading to get live streaming and telecast details of the game. 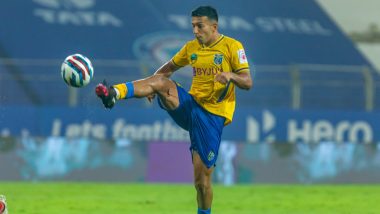 Kerala Blasters would be heading into the ISL 2021-22 Semifinal 1 Leg 2 match against Jamshedpur FC knowing that they need to score one more and potentially not concede any to secure passage into the final. The first leg between these two sides ended in a 1-0 win for Kerala but even though it is an advantage, Jamshedpur FC would believe that they can overturn the deficit to enter the final for the first time ever. Owen Coyle's men won the ISL shield by finishing top of the table and now, it's time for them to add the ISL title to their trophy cabinet. Sunil Chhetri Ruled Out of India’s Friendlies Against Bahrain and Belarus Due to Injury

Denechandram Meitei would miss out for Kerala Blasters while Boris Singh and Seimilen Doungel are set to be absent for Jamshedpur FC. Undefeated in seven games at the Tilak Maidan Stadium, Jamshedpur FC would undoubtedly fancy their chances of overcoming the one-goal deficit and potentially beating Kerala en route to the final. But the Blasters have the experience of making it to the summit clash before and that might come in handy. Youngster Sahal Abdul Samad, who scored in the first leg, would once again be a player they would rely on while Jamshedpur would expect the in-form Greg Stewart and also Daniel Chukwu to score today.

The Kerala Blasters FC vs Jamshedpur FC, Semifinal 1 Leg 2 match in ISL 2021-22 will be played at the Tilak Maidan Stadium, in Vasco,. The match will take place on March 15, 2022 (Tuesday) and it is scheduled to begin at 07:30 pm IST (Indian Standard Time).

Fans can also watch Kerala Blasters FC vs Jamshedpur FC match online. Since Star Sports network is the official broadcaster of ISL 2021-22, Disney+Hotstar will be live streaming the KBFC vs JFC clash online for fans. JIO and Airtel subscribers can also follow the match on JIO TV and XStream.

(The above story first appeared on LatestLY on Mar 15, 2022 11:32 AM IST. For more news and updates on politics, world, sports, entertainment and lifestyle, log on to our website latestly.com).