Mohamed Salah's current contract situation at Liverpool is still unresolved and Juventus would hope to make use of this situation to have the Egyptian move to Italy. Salah is set to be a free agent in 2023. 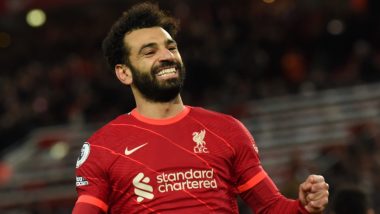 Mohamed Salah is reportedly drawing interest from Juventus with the Serie A giants ready to sign him ahead of the next season. The Egypt forward is currently involved in a complicated contract situation at Liverpool with both parties not yet able to reach a solution on a prospective new deal. With a year left on his contract, the Anfield club would rather find it profitable to sell him to Juventus rather than see him leave as a free agent next season if they fail to have him sign a new contract. Earlier, it was confirmed that Juventus would not renew Paulo Dybala's contract and with the Argentine departing, chances are high that the Serie A giants find a way to bring Salah to Turin as his replacement. Mohamed Salah Breaks Didier Drogba’s Incredible Record During Liverpool’s 6–0 Win Over Leeds

According to a report in Gazzetta, Salah is set to be offered a four-year contract by Juventus with the Bianconeri shelling out £10m per season to the Egyptian. There seems to be some space in Juventus' wage bill with Dybala's exit confirmed and the shocking departure of Portugal star Cristiano Ronaldo this season.  Salah was brought by Liverpool for just £43m from AS Roma back in 2017 and since then, he has had a meteoric rise to become one of the best players on the planet. His consistency for Liverpool across competitions is unmatched and together with Sadio Mane and Roberto Firmino, the Egyptian forms one of the deadliest attacking trios in club football.  Together, they have led Liverpool to major title wins,  with the Premier League, Champions League and Club World Cup being among them.

With Salah, Juventus would have a player who is versatlie and has a knack for scoring goals consistently. He is currently the top scorer in the Premier League this season with 20 strikes.  A lot would depend on him if Liverpool are to realise their dream of quadruple this season and Anfield loyalists would hope that they can have the Egyptian pen a new deal soon.

(The above story first appeared on LatestLY on Mar 24, 2022 11:39 AM IST. For more news and updates on politics, world, sports, entertainment and lifestyle, log on to our website latestly.com).