Northern Ireland vs Germany, Euro 2020 Qualifiers Live Streaming & Match Time in IST: How to Get Live Telecast of NIR vs GER on TV & Football Score Updates in India 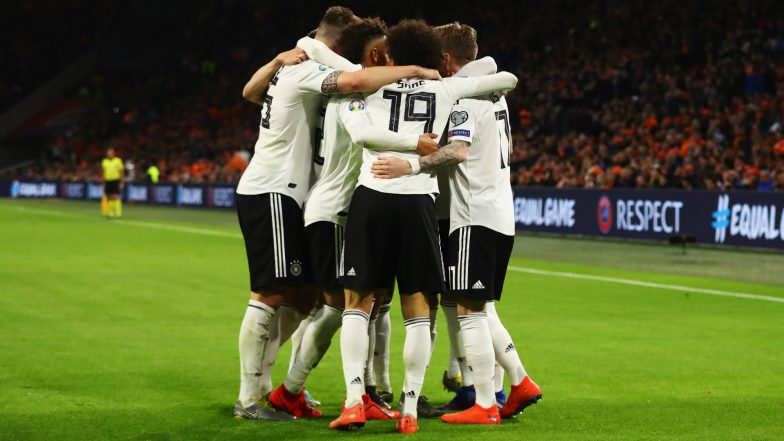 Northern Ireland vs Germany, Euro 2020 Qualifiers Live Streaming: Germany are in a bit of trouble following their defeat at the hands of the Netherlands at home, which has made things interesting in Group C. The 2014 World Cup champions are second in the group, trailing Northern Ireland by three points. The Dutch have similar points as the Germans but with a game in hand which makes their match against Northern Ireland tonight extremely important. The Irish boys will be confident of playing at home, but a desperate Germany needs to go all out against them to gain all 3 points. Another disappointing result for Joachim Loew’s men could leave their fate hanging by a thread. Meanwhile, if you are searching for NIR vs GER (Northern Ireland vs Germany) live streaming and live telecast in India, you will find all the relevant information below.

A host of youngster turned up for the hosts in their previous game, but parity should be restored when Germany come visiting. Jonny Evans has been playing at the highest level in English football for quite some time, and his job will be to keep Germany at bay. With Paddy McCnair in the middle flanked by Corry Evans and Steven Dais, the midfield is full of energy. Conor Washington will be back in the starting eleven to lead the Northern Ireland attack. Kyle Lafferty on the left-wing could stretch the German defence which not in the best of form.

Germany need to be at their creative best and hence needs Marco Reus and Serge Gnabry to have a good game. Timo Werner had a quite game against the Dutch, but lack of alternatives means he will start. At the back, Bayern Munich’s Niklas Sule has a very important test coming up to lead an inexperienced back four. A traditional 4-3-3 for the Germans with Toni Kroos at the base looks like the order for the day.

Northern Ireland vs Germany will take place on late Monday night in India i.e. August 10 at 12.15am IST (Indian Standard Time). The exciting Euro 2020 Qualifiers match in Group C will be held at Windsor Park.

Northern Ireland are undefeated in 2019, which is bad news for the German fans considering how important a win is for them tonight. Joachim Loew has his job on the line, and we could see an improved performance from the German stars.