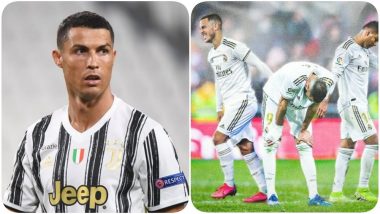 Last night the fans of Juventus and Real Madrid witnessed a terrible heartbreak as both teams crashed out of the Champions League 2019-20. While the Serie A 2019-20 champion lost to Lyon on away goals whereas, the La Liga 2019-20 lost to Manchester City with an aggregate of 4-2. Needless to say that the fans of both teams were extremely dejected and thought that Ronaldo and Los Blancos miss each other dearly. The fans took to social media and posted tweets about the same. Ronaldo made way to the Italian club in 2018 and broke his nine-year-old long stint with Real Madrid. Cristiano Ronaldo Bursts Into Tears After Lyon Knock Juventus Out of Champions League 2019-20, CR7 Comforted by Teammate Giorgio Chiellini (See Pic).

Last night the five-time Ballon d'Or winner scored a couple of goals and shattered records at galore. Whereas, Real Madrid who already had an upper hand in the match lost at an aggregate of 4-2. This was the first time since 2010 that Cristiano Ronaldo got knocked out in the round of 16 and For the first time in his managerial career, Zinedine Zidane has been eliminated from the Champions League. Now the fans posted tweets about how the two miss each other dearly. Check them out below:

#RealMadrid and Cristiano Ronaldo clearly miss each other 💔

Some things are just perfectly made for each other. Ronaldo and Real Madrid is a partnership that should've never ended pic.twitter.com/C20mqoBleL

Real Madrid & Ronaldo the most pointless breakup of all time, all parties to blame and no one benefited.

Belong to each other

I'm gonna say it Out Loud:@Cristiano Ronaldo and @realmadrid belong to each other.

Real Madrid writing to Juve to give them Ronaldo back pic.twitter.com/KmuP9qDToO

Ronaldo had been in a great form since the start of the year. With a couple of goals last night, Ronaldo became the player to score most goals for Juventus. But that wasn't enough.  Now only time will tell is Ronaldo would go back to Real Madrid.

(The above story first appeared on LatestLY on Aug 08, 2020 02:22 PM IST. For more news and updates on politics, world, sports, entertainment and lifestyle, log on to our website latestly.com).