Manu Bhaker at Tokyo Olympics 2020: NRAI Chief Explains What Could Have Had Negative Impact on Star Athlete

Singh clearly singled out Jaspal Rana and a tiff between him and Bhaker after the Delhi World Cup. He also added that he had tried to make peace between Bhaker and Rana and when things eventually didn't work out, he brought in Ronak Pandit. 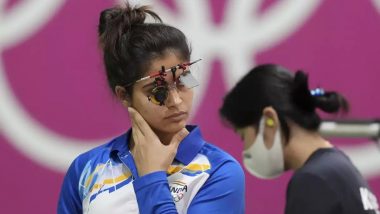 One of India's biggest disappointments in the ongoing Tokyo Olympics has been the shooting contingent. Despite showing a lot of promise, they have failed to live up to the expectations. Manu Bhaker has been one of the athletes who was tipped to secure a podium finish before the Olympics and despite the youngster showing a lot of promise even when her weapon malfunctioned during the women’s 10m air pistol qualification round, there was no medal to show for it. On Tuesday, July 27, Bhaker and compatriot Saurabh Chaudhary crashed out of the second qualification of 10m air pistol mixed team event. And National Rifle Association of India (NRAI) chief Raninder Singh opened up at length about what could have possibly left a negative impact on Bhaker ahead of the Olympics. Manu Bhaker, Saurabh Chaudhary Fail to Qualify for Medal Match in 10m Air Pistol Mixed Team Event at Tokyo Olympics 2020

Singh clearly singled out Jaspal Rana and a tiff between him and Bhaker after the Delhi World Cup. Stating that he tried to ensure peace between the two parties, Singh added that he had to bring in a new coach for Bhaker after it didn't work out at all. He said, "There was just one person who was the negative factor in the whole thing, and I am calling it right now. I am referring to Jaspal Rana. Before the tour to Croatia, during the World Cup in Delhi and before that, there was a lot of internal wrangling in the pistol squad among coaches. That was addressed to all by me in person in an eight-page letter I wrote prior to the team leaving for Croatia. I think everybody respected that."

He nonetheless didn't want to blame Rana completely for Bhaker's failure in Tokyo but conceded that it might just have had an impact on her performance. “Our performance here is not Jaspal’s fault. I can’t hold him responsible for this. I can certainly say it might have had an impact on Manu to some extent," he stated. Singh also added that he had brought Rana after he tasted a lot of success at the junior level.

He said, "I cannot speak for individuals. We have honoured all our coaches, all our ex-athletes including Jaspal. It was I who got him into the programme, it is I who has supported him throughout. It’s for reasons best known to him and the athlete concerned, they are unable to work together, well, this is not China we live in. I cannot dictate what they will do. They have to be willing to work with each other,”

Singh also restated that he had tried to make peace between Bhaker and Rana and when things eventually didn't work out, he brought in Ronak Pandit, who would work with both 10 and 25m shooters.

"I got Manu’s family together with Jaspal but they did not get on. It’s not just Jaspal, the other side also was not willing to work with him because of various instances that they both cited. The girl said something, the parents said something, Jaspal in his defence said something. I tried twice, once during the World Cup and once after,” he said.

“The second best thing I could do is in the whole of India, we have just one coach who can deal with both, 10m and 25m pistol and that is Ronak Pandit, because of his wife Heena Sidhu, who is the same kind of an athlete. He put in a brilliant effort, let me tell you. Don’t let this 186 reflect on his effort because you saw the fightback she gave in the other event,” the NRAI chief added.

(The above story first appeared on LatestLY on Jul 28, 2021 01:05 AM IST. For more news and updates on politics, world, sports, entertainment and lifestyle, log on to our website latestly.com).