Sting Hints at Match Against The Undertaker, WCW Franchise To Approach WWE's Deadman For ‘Last Ride’? 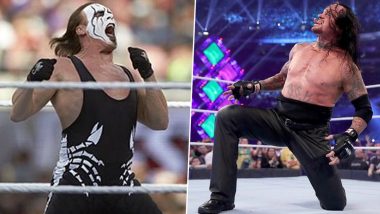 WCW Franchise Sting through his latest tweet hints for a match against The Undertaker. Both wrestlers have already retired from wrestling, however, we have seen superstars in this industry before coming out of retirement just for that one match. Sting was a famous WCW star of his time, while The Deadman is a WWE legend. The Phenom recently announced his retirement on the last episode of 'The Last Ride' documentary which aired on WWE Network on June 21, 2020. The Undertaker Recalls Match With Goldberg That Almost Killed Him, Watch Video of The Retired WWE Star Reveal How He Survived by ‘Two Inches’

Sting headlined the WWE Hall of Fame class of April 2, 2016, where he announced his retirement. He was last seen in action against Seth Rollins at Night of Champions 2015 pay per view event. The Iconic Sting lost that match, however, at his age, he did manage to put up a good fight. In a WWE network show called Legends with JBL, 61 years old Sting had revealed that he is still hopeful for a match with the Phenom. Even The Undertaker mentioned in the final chapter of The Last Ride, that if Vince McMahon requires him, he will consider making a return provided if he is in good condition at that time. Sting in his latest tweet, indeed wishes for one last match against The Undertaker, this might draw The Deadman and WWE attention. The Undertaker Announces Retirement From WWE, Says ‘There’s Nothing Left for Me to Conquer or Accomplish’

Sting Hints For Match With The Undertaker

Who wants to take a “last” ride with Sting? https://t.co/6JT1EC3mbx

There are two similarities between The Deadman and Franchise, both have been loyal to their companies throughout and both had a mysterious gimmick which can fear any opponent. We don't know whether WWE will ever think of this dream match or not, however, fans would definitely look forward to the epic battle between The Undertaker and Sting.

(The above story first appeared on LatestLY on Jul 02, 2020 07:10 PM IST. For more news and updates on politics, world, sports, entertainment and lifestyle, log on to our website latestly.com).