Nick Kyrgios Slams Rafael Nadal for his Comments on Novak Djokovic's Visa Controversy, Asks 'Where is Your Support for the Guy?

Nadal had explained that the tournament was much bigger than any player including him or even Roger Federer. Prior to that he had said Novak Djokovic faced the consequences of the choices he made. He could have easily played at the Australian Open 2022 if he had been vaccinated. These didn't go well hurt Nick Kyrgios. 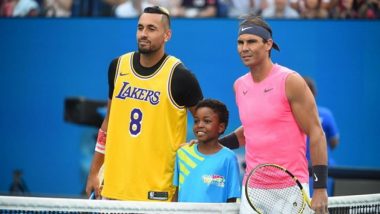 This surely did not go well with Kyrgios who did not mince his words to lash out at Nadal. The Australian tennis star was asked about his stand about the controversy during an interview with SportsClub and here's what he had to say. "On a human level, he needs support from other player. [Stefanos] Tsitispas, I get you have your views on vaccination. [Andy] Murray, we can always count to say the right thing, Nadal whatever... But bro, where is your support for the guy?"

Novak Djokovic's visa controversy finally ended with his visa being provoked for the second time and his appeal for the visas being ruled out by the Australian Open 2022. He issued a statement after the Australian court ruled out his appeal and expressed his disappointment. However, he promised to fully cooperate with the authorities for the process of deportation.

(The above story first appeared on LatestLY on Jan 16, 2022 03:31 PM IST. For more news and updates on politics, world, sports, entertainment and lifestyle, log on to our website latestly.com).