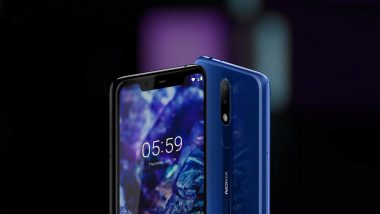 New Delhi, Aug 22: HMD Global, that makes and sells Nokia-branded phones, on Thursday said Android 10 will soon arrive on entire Nokia smartphone portfolio. Starting in Q4 2019, Nokia smartphone fans can get their hands on the very latest Android 10 software upgrade. HMD Global has also confirmed that an affordable Nokia 5G phone that would cost around half of the existing ones would arrive next year in the US. Google Officially Names Android Q as Android 10; Ditches Long Used Dessert-Based Naming.

"Nokia smartphones were the first whole portfolio to benefit from a 2-letter upgrade from Android Nougat to Android Oreo and then Android Pie. We were the fastest manufacturer to upgrade from Android Oreo to Android Pie across the range," Juho Sarvikas, Chief Product Officer, HMD Global, said in a statement. Android 10 Launched by Google: From Astroid to Pie, Check Names of All Versions of the Most Used Mobile Operating System.

Android Q will be called #Android10. As a global operating system, it’s important that the release names are clear and relatable for everyone in the world. Learn more: https://t.co/VKBcoSBGLt pic.twitter.com/Ek7izFEnuq

"With today's roll-out plan, we look set to do it even faster for Android Pie to Android 10 upgrades. We are the only manufacturer 100% committed to having the latest Android across the entire portfolio," he added.

(The above story first appeared on LatestLY on Aug 23, 2019 04:33 PM IST. For more news and updates on politics, world, sports, entertainment and lifestyle, log on to our website latestly.com).