Facebook has announced to start experimenting ads in its Oculus virtual reality (VR) headsets. Facebook said it will provide more details on when ads may become more broadly available across the Oculus Platform and in the Oculus mobile app. 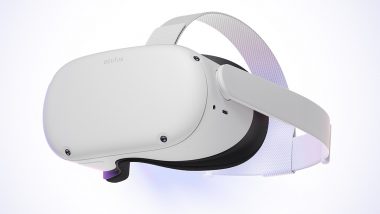 San Francisco: Facebook has announced to start experimenting ads in its Oculus virtual reality (VR) headsets. The ad experiment on Oculus Quest VR system will begin with Blaston from Resolution Games and a couple other developers over the coming weeks, the company said in a statement on Wednesday. Last month, Facebook announced that it is starting to test ads in the Oculus mobile app to give developers a new way to showcase their VR applications. Facebook To Roll Out Podcast Feature Next Week: Report.

"We are excited to share a look at the next phase of that exploration: a small test of in-headset ads," the social network said.

Currently, this is a test with a few apps. Facebook said it will provide more details on when ads may become more broadly available across the Oculus Platform and in the Oculus mobile app.

"The addition of ads on the Oculus Platform doesn't change our privacy or advertising policies," the company said. "We do not use information processed and stored locally on your headset to target ads. Processing and storing information on the device means it doesn't leave your headset or reach Facebook servers, so it can't be used for advertising".

According to reports, nearly 10,000 Facebook employees -- almost a fifth of its total workforce -- are currently working in the augmented and virtual reality (AR/VR) labs, clearly indicating that the social network has bet really big on the immersive technology. Facebook-owned Oculus virtual reality (VR) headsets captured 53 per cent of the extended reality (XR) headset shipments in 2020 which declined 9 per cent (on-year), according to a new report.

Oculus also dominated the list of top five XR devices. Three headsets in the list were from Oculus. Facebook CEO Mark Zuckerberg has said he is aiming to introduce more realistic digital avatars for users of VR headsets with eye and face tracking, in order to create a better social experience into the device.

(The above story first appeared on LatestLY on Jun 17, 2021 04:21 PM IST. For more news and updates on politics, world, sports, entertainment and lifestyle, log on to our website latestly.com).