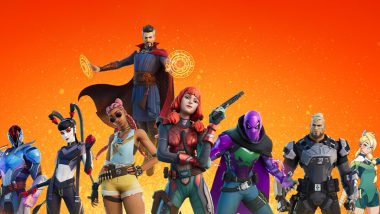 San Francisco: Fortnite fans can now use Microsoft's Xbox Cloud Gaming platform to access the game on iOS, Android devices and Windows PCs. The tech giant has announced that it has teamed up with Epic Games to make Fortnite available on supported browser-enabled devices for free with Xbox Cloud Gaming (Beta). Fortress Night, Chinese Version of Video Game Fortnite, To Shut Down in China From November 15.

"As part of our mission to bring the joy and community of gaming to players wherever they are and to make gaming more accessible to people around the world, I am excited to announce that we have partnered with Epic Games to make Fortnite available on supported browser-enabled devices for free with Xbox Cloud Gaming (Beta) in 26 countries," Catherine Gluckstein, Vice President and Head of Product, Xbox Cloud Gaming, said in a blogpost.

This means, for those who love to play Fortnite, they only need two things to play in cloud-supported markets, a Microsoft account or an iOS, iPadOS, Android phone or tablet, or Windows PC with internet access. With no installation or memberships required, all what users need to do is go to Xbox.com/play on their web browser and sign-in with Microsoft Account.

"It is an important step to add a Free-to-Play title to the cloud gaming catalog as we continue our cloud journey," the company said. "We are starting with Fortnite and will look to bring more Free-to-Play games people love in the future. At Xbox we want to make gaming accessible to the 3 billion players around the world, and cloud has an important role in that mission," it added.

This is the first time the game has been available to all iOS users since Apple withdrew it from the App Store in 2020 due to a disagreement over Apple's 30 per cent developer fee. Nvidia offered iOS Fortnite gamers a closed beta programme to play the game in January, but access was limited.

(The above story first appeared on LatestLY on May 06, 2022 12:36 PM IST. For more news and updates on politics, world, sports, entertainment and lifestyle, log on to our website latestly.com).