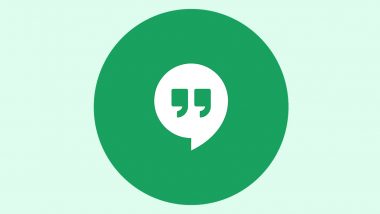 Google started Google Hangouts in 2013 as a Google+ feature. This service is in the final stages of closure, so Google has removed it from Google Play Store and App Store. However, Android users who have already downloaded this app will be able to see it in the list of installed apps. However, new users as well as those who have not downloaded it, will not be able to see Google Hangouts. Google Maps Down: Navigation App Crashes for Many Users Due to Major Technical Glitch

In November 2018, it was reported that Google Hangouts would be replaced by Google Chat. After this, the company started sending workspace users from Hangouts to Meet in October 2020. According to a report by 9to5Google, Google Hangouts has been removed from the Google Play Store and App Store to prevent users from downloading the discontinued app to their Android and iOS devices.  WhatsApp To Soon Allow Users To Share Media Files Up to 2GB in Size: Report

Google has moved pre-existing workspace enterprise accounts from Hangouts to Chat. Along with this, free accounts have also been advised to use it. Users who have not yet downloaded Google Chat on their smartphones can also use the Gmail app. Integrated Chat and Google Meet support has been given in this app.

(The above story first appeared on LatestLY on Mar 29, 2022 09:31 PM IST. For more news and updates on politics, world, sports, entertainment and lifestyle, log on to our website latestly.com).